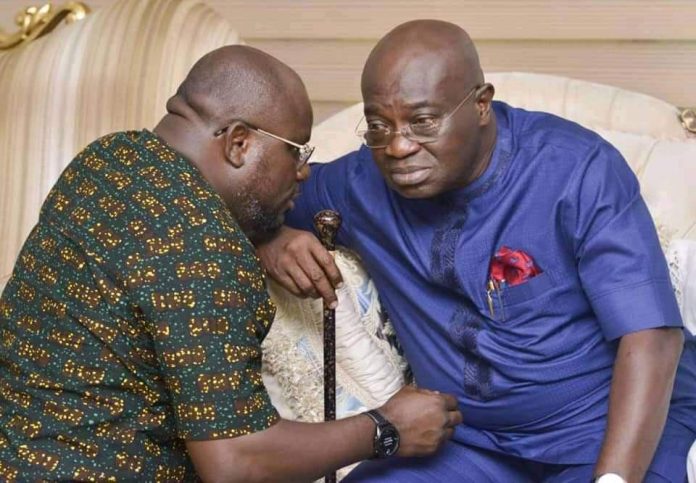 Obingwa Local Government Area is apparently one of the Most important Local Government in Abia State right now, reason not far fetched, apart from being one of the few Local Governments in Nigeria that has been blessed enough to produce about two Deputy Governors of a State, it historically produced the First Abia State Governor of Ngwa Extraction, His Excellency , Okezie Victor Ikpeazu (PhD).

The Governor is not just our Leader but the Father of the Whole State, So it’s not inappropriate to say that “WE ARE ALL FROM OBINGWA”.

Obingwa West otherwise known as Uhie Constituency delegates will in a matter of days elect a PDP Candidate who will ultimately represent “Us” in the State House of Assembly. Ordinarily this is not and shouldn’t be seen as any task at all if not for diversity of interests as evident in the game of politics and to an extent, some hatchet jobs of some fifth columnists.

However, the delegates of Uhie Constituency has only One Job on 14th May and that is to elect Erondu Uchenna Erondu Jnr (IGODO) as the party flag bearer!

Electing Igodo is very significant in so many ways and for so many Reasons!

Electing Igodo is a Special Form of Saying Thank You to a man who has helped Lives and has continued to give meaning to Lives! I overheard some one say “but It’s our money “ or Whatever that implies but that’s a very sad, erroneous and pitiful assertion. Erondu Junior is apparently not the only Opportuned Onye Obingwa West in the Ikpeazu Led Administration, What has stopped the rest from using that “Our money” to help other lives .

I also ran into my fellow Onye Obingwa , who agreed with me that Erondu Junior is our best bet but in his words “Erondu has benefitted enough, so he should let another person go”

I would then ask him if Erondu Junior has ever been elected into any office before now, he answered in the negative.

I also asked him if our brother, Igodo is the only Onye Uhie who Went to Umuahia with Dee Okezie in 2015, he answered in the negative and even added that all the Major Aspirants have all been in Government in different capacities since 2015. I also reminded him that we all remember how and what some of these aspirants looked like in 2014/15 before Umuahia. So I wonder why the singular mention of Erondu Junior in this regards as if his opponents are coming from some Blue Chip Multinational Companies with no semblance of Government patronage!

A vote for Erondu Jnr by Delegates is a vote to thank a Man who steadied the tide when it mattered most for the People of Obingwa in Goverment! A vote for a man who takes all the blames for everything that appear wrong in the System even when he would be most times innocent but has to bear the cloak for the Love of the First Governor of Ngwa extraction!

Electing Erondu is a Salient responsibility for A man who who is not given to “Eye Service” No matter who you are supporting, We can always agree that Igodo is a man who you will always know where he stands at every point in time with you!

Igodo is a Man who “PICKS CALLS” bearing good news for you. With Igodo, accessibility and gettability means Having a solution to myriads of problems facing our people.

With Erondu Jnr Accessibility means SERVICE to Nde Uhie and not this EYE SERVICE AND MERE LIP SERVICE being touted from some quarters. A Vote for Erondu Junior is a vote for Equity because Equity in Nigerian politics is akin to the Igbo Cosmological Ofo, Onye obula ji Equity , mana Equity ma onye ji ya!

I am not in any wear trying to wear Igodo some Toga Saints for he is not and neither has he laid claims to any form of perfections but just like the Trending Song “No Hands” by The Ghanaian musician , Kwaku the Traveller rightly implied, let he who has no sin put his hands up, Obviously “NO HANDS “!!

Lest i digress from the topic, IF I WERE OKEZIE IKPEAZU;

We have established doubtlessly and at countless times that His Excellency, Governor Okezie Ikpeazu remains the Only leader of the party in the State vis a vis Obingwa.
Anyone saying or acting contrary is only committing perjury or can at best be dismissed as a Burlesque!

I for One expects His Excellency to show Leadership in Obingwa as Always just like he did in The State simply by using His Famed Torchlight!
If The Governor can use the Torchlight in the State which saved Party faithfuls from directionless permutations and tensed political space why not Obingwa West?

IF I WERE OKEZIE IKPEAZU, I will use my TORCH!!

One would say , the Governor has refused to make a public stand because of his core democratic beliefs , i share same sentiment too for we are all indeed “DEMOCRATS”!

But as a Child who grew up in the university Community, I view Political aspirations into political offices like one seeking admission into a University. While we have a Jamb list, Supplementary list, Direct Entry and then There is this VC list! The Governor being an academic Don himself will agree with me that none of this mode of admission is invalid!

Dee Okezie, Your Boy and Loyal Servant, Erondu Junior deserves to be in the VC list and this doesn’t negate the fact that he is already in the Jamb list which he has earned by how much work he has done for his people!

I know some has claimed that other aspirants share similar relationships with you, even as witty as this claim sounds, I Must agree that all other aspirants are qualified but like the saying goes, our Friends are more qualified than those who are not! IF I WERE HIS EXCELLENCY, I will show open Support for a young Man who is ready to lay his life for me which he has demonstrated severally!

I watched my Governor in a Survival thanksgiving Service on 22nd August 2020, he gave thanks To God for giving him a second chance but asked us to thank Erondu junior too.

Many us might not be opportune to know so many things that transpired in the events of July 2020 but we know that while those life threatening phase of our Governor lingered and the likes of Erondu ready to gjve their own life so the Governor lives, some of the aspirants were reportedly lobbying to be deputy Governors already! Some were reported to have even gone as far as buying “ Ehi awusa” and sojourned on courtesy calls!
What a Life!

I have plans of making this shorter than expected, so I will Stop by saying that if I WERE the Governor, I would have advised other opponents earlier not to waste their Money on buying forms because Okuko anaghi echefu onye foro ya Odu na udu mmiri! But it’s good he allowed them purchase forms at least they have contributed to political activities especially in the Party Head Office Umuahia thereby enriching the process.

I Won’t Appoint Anyone Who Lack Integrity Into My Next Cabinet...

Why We Have Not Been Able To Rescue Kidnapped Kaduna Students...

7 Ways To Construct A Building At Reduced Cost In Nigeria