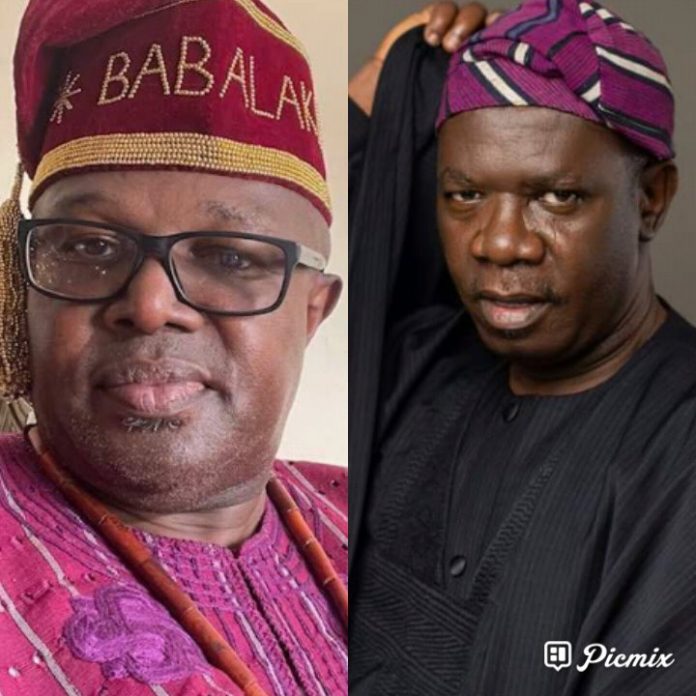 The Senator representing Ondo South senatorial district, Nicholas Tofowomo, has dragged a former Deputy Governor of Ondo State, Agboola Ajayi to a Federal High Court sitting in Akure seeking his disqualification as the 2023 Senatorial candidate of the People’s Democratic Party (PDP) for the district over his alleged controversial academic records.

In a suit number: FHC/CS/AK/ 83 /2022 filed on Tuesday July 5, 2022, Senator Tofowomo who came second in the PDP senatorial primary, said Agboola did not meet the constitutional requirements for contesting the 2023 general election as contained in the interpretation and application of Section  66(1)(i) of the Constitution of the Federal Republic of Nigeria, 1999 (as amended) and Section 29(5) & (6) of the Electoral Act, 2022 as well as other relevant laws.

Tofowomo through his lawyer, Mr Femi Emodamori, claimed that the court should determine if together with the totality of the facts before the Court,  the 1st Defendant (Agboola) did not present false information and/or forged certificate(s) in his INEC Form EC9 and the other documents attached thereto which he submitted to the 3rd Defendant (INEC) as the candidate of the 2nd Defendant for Ondo South Senatorial District in the 2023 General Election.

“I verily believe that the 1st Defendant (Agboola) lied and/or swore to a false information when he stated in Exhibit FEE4 (the Affidavit For Correction of Date of Birth which he submitted to the 3rd Defendant) that he was issued the 2004 WASSC (Exhibit FEE3) No. NGWASSCS 5529745 and claimed “that in the said Certificate my date of birth was mistakenly printed as December 8, 1980 instead of 24th September 1968”.

The Senator also stated that “Whether, having regard to Section 29 (6) of the Electoral Act, 2022, the 1st Defendant (Agboola) should be disqualified as the candidate of the 2nd Defendant (PDP) for Ondo South Senatorial District in the 2023 General Election.

“AN ORDER of this Honourable Court disqualifying the 1st Defendant as the candidate of the 2nd Defendant for Ondo South Senatorial District in the 2023 General Elections.

“AN ORDER of this Honourable Court directing the 2nd and 3rd Defendants to substitute the Plaintiff for the 1st Defendant as the candidate of the 2nd Defendant for Ondo South Senatorial District in the 2023 General Elections,” Tofowomo prayed the court.

Reacting to the law suit, Agboola said while Tofowomo has the right to legally fight for his fundamental rights, he remains his brother and colleague in whom, he has high regard for. he further add that the party is working behind closed door towards reconcilng aggrieved party members. Below is his full reaction

The attention of the former Deputy Governor of Ondo State and PDP Candidate for Ondo South Senatorial District has been drawn to various insinuations on the media, particularly, the online platforms that the Senator Representing Ondo South in the upper Chamber of the National Assembly, Nicholas Tofowomo, may have filed a suit to challenge the outcome of the May 23rd Primary Election of the Peoples Democratic Party (PDP).

Agboola Ajayi respects Senator Nicholas Tofowomo as a brother; recognizes him as a leader and as such counts on his enomous supports towards the party’s victory in the forthcoming general election.

However, it is within the exclusive right of Distinguished Senator Nicholas Tofowomo to approach the court of law wherever he feels that his right has been infringed upon and as a matter of fact, it falls within the Nigerian electoral process to so do.

Apparently, it should be noted that leaders of our great party have been working hard to appeal and persuade all aggrieved persons in the party to work together in a view to ensuring the victory of the party at the 2023 General Elections.

We are very confident as loyal party members that total reconciliation among the critical stakeholders is achievable.

RCCG Healing The World With His Love Foundation

I Killed The Mother Of My Girlfriend Because She Canceled Our...