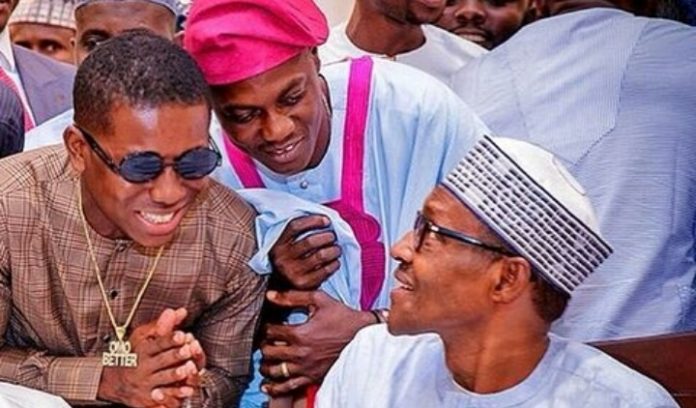 Temitope Adekunle, aka Small Doctor, has denied receiving a two million naira cash gift from President Muhammadu Buhari during a recent visit To Aso Rock with some other entertainers.

A former Director of New Media for the Peoples Democratic Party (PDP), Deji Adeyanju, recently revealed that President Muhammadu Buhari gave some selected entertainers N2m each during a visit to Aso Rock in Abuja, which has raised eyebrows.

Adeyanju had written on Twitter, “So, some youths went to Aso Rock yesterday to see Buhari and collected ‘thanks for coming’, N2m each. Very soon, they will start telling us why it is good for Buhari to continue…”

However, while speaking with Sunday Scoop, the penalty crooner said he didn’t collect such money from the President and he didn’t think any other entertainer did also.

He said, “I am not aware that the President gave anyone N2m. I was only invited to Aso Rock during the Ramadan period, which I honoured. Have you asked Sound Sultan or Kunle Afolayan and they said Buhari gave us N2m each. Well, I don’t know if they gave anyone but I didn’t collect such money.”

According to him, it was like a dream come true for him to dine with the number one citizen of Nigeria. He added, “I have always worked hard and my hard work is paying off. I felt humbled and privileged meeting Mr. President. Looking at where I used to be, there has been a major turnaround in my life. Do you remember I was once a bus conductor?”

Bishop Idahosa Eulogies Kwankwaso At 66, Says He Is A Leader Who Put The Interest Of The People First

We Arrested Orji’s Son, We Have No Business With Atiku’s Son – EFCC