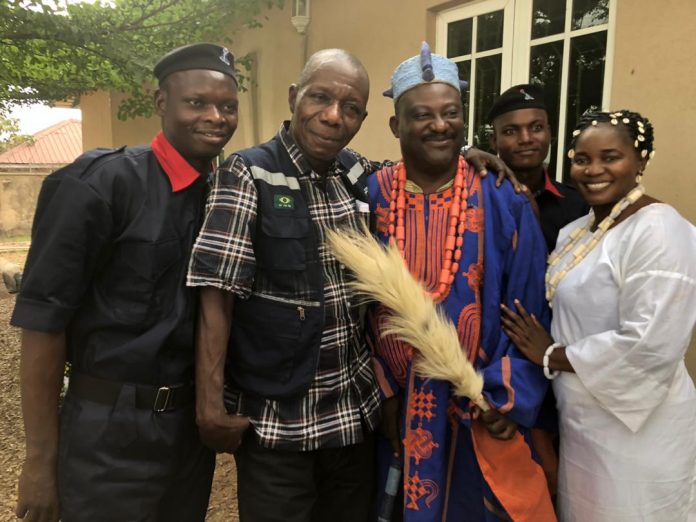 It was all glamour and classy at on going shooting location of Cornerstone films in Abeokuta, Ogun state

The multi-million project which parades seasons christendom actors like Isaac Femi- Akintunde as a lead actor have Gbenga Awoyemi as a director.

The movie titled ” Agbo Odaju” was centre on a family who were very poor, the man out of frustration joined occultic and there in was told that he will be blessed with twins and that those twins must be taken to shrine every year for celebration which in turn will make the man fortune to turn good and accordingly, the man became rich and wealth and famous but what come after it was beyond him.

The film which is still is still in process in Abeokuta is a multi million naira project “The project is big but we serve the bigger God. Our God is bigger than the project” stated the director of the epic movie, Gbenga Awoyemi, Evangelist Abraham Olorunnimilo Ajao the president of Cornerstone films international concur.

“Like I always says we are not going to down grade our priority in given out the best for this movie even though it is money consume. Although we still need financial help from corporate bodies” It would be recalled that Cornerstone films international has been ditching out series of films which they distribute for free among which are , ,”irora agbelebu”

How Oluwo’s Security Hilux Was Stolen in Lagos Hotel

Osun Debate: Adeleke Was Busy Dancing Skelewu While The Debate Was On – Oshiomhole

Forget Sex, If You Can’t Make Me Have Orgasm – Actress,...