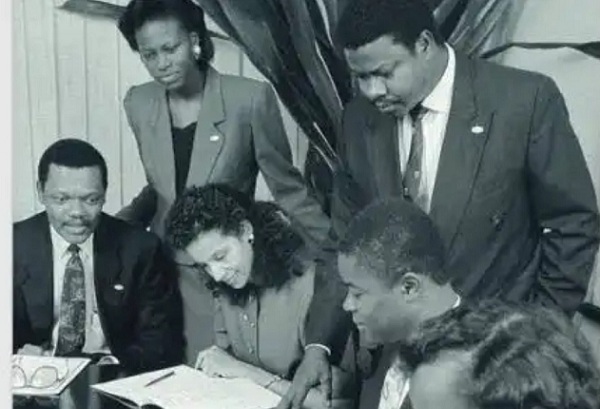 In management and in life, a picture always speaks a thousand words. A few months ago, a curious photograph surfaced online. It was posted by the veteran investment banker himself to celebrate the institution he built. In the past four decades of reading autobiographies, I have learned that great men and women are defined by only three things – the indelible character they exude, the institutions they build and the quality of offspring or protégés they nurture. Atedo Peterside is one man who appears to have done well if anything, he has built a great institution and no one can reasonably argue with that!

In the monochrome photograph he posted about the founding team of three women and three men in the bank he founded in 1989, the bank that has now become the IBTC in today’s Stanbic IBTC, most of the viewers simply ‘liked’ it while a few others congratulated him and praised him for his business foresight.

An interesting young lady, however, took a discerning view of the simple photograph and commented ‘this picture screams of equality’. Indeed, that view resonates with some of the recent and ongoing empirical findings that our team at The Diversity Initiative have been reaching consistently about successful African corporations. Businesses that respect diversity simply outperforms businesses that don’t.

Perhaps not in the short-term, but in the long-term they do even if not in strict financial measures. A few months before the curious release by the doyen of Nigerian investment banking himself, the International Finance Corporation (IFC) in conjunction with the Swiss Confederation State Secretariat for Economic Affairs, the Institute of Directors and ‘Women in Management and Business’ (WIMBIZ) released a working paper titled ‘Women on Boards in Nigeria’.

The caveat though is that the IFC report used only a five-year horizon, probably due to limited data. The second explanation to many of the empirical findings of women on boards is that women are not a homogenous group so simply assuming that there would be a correlation or indeed a causation between having increased women representation and financial performance may be presumptuous if not simplistic. There is a technique to optimising diversity and making the most of women in senior management and on boards, and Mr. Peterside’s single photograph shows us the three secrets.

First, diversity should never be at the risk of meritocracy or excellence. In Mr. Peterside’s photograph of six persons, every single one of those persons who are still alive today are still actively working, or involved in financial services today. Indeed, the three women in the picture, Sola David-Borha, Angela Omo-Dare and Yewande Muoyo spent the next two or three decades working with Mr. Peterside.

All of them spent the rest of their banking career at IBTC: Yewande Muoyo leaving after over twenty years to join the Ogun State Government as Commissioner of Finance, Angela Omo-Dare staying on as either company secretary or head of legal services for another thirty years till she retired only last year in 2019, and the tireless, indomitable Sola David-Borha still waxing strong in the parent company Standard Bank in South Africa.

The beauty of that photograph is therefore not only that it speaks to the diversity mentality of Atedo Peterside in having a balanced team, but the futuristic power and hidden messages. Simply put, how do you keep three young and very bright women working with you at the highest levels for almost three decades till they retire, when few other financial institutions have done so in modern-day Nigeria. While there may be a twist of providence and happenstance to the IBTC story, there is still a clear management lesson.

Lesson 1: Pick a diverse team when starting your business, and pick them very wisely and based on merit. Pick people with a genuine passion for what you do and not gamblers nor speculators in the industry for the short-run.

The second lesson from the iconic photograph is a bit cryptic. Even though all of the founding persons in the IBTC management team swore by investment banking till retirement, and those alive are all still primarily involved in financial services, it is more curious that none of the other merchant banks or investment banks that existed at the time that photograph was taken exists today, apart from FCMB.

At least not by name. No other merchant bank or investment bank in the pre-1990 era, safe FCMB, still has its name as part of a registered regional, national, or international bank in Nigeria today. Simply put, IBTC was the only merchant or investment bank that survived the 2005 holocaust of Nigerian banks. This is recognising the fact that FCMB had already taken the universal banking route by the time of the 2005 banking holocaust. Does having largely the same teamwork with a CEO for sixteen years guarantee longevity as it did for IBTC or superior performance. Well, there is no statistical model that can be used to validate that hypothesis.

READ ALSO:  7 Things You Should Know About Today’s Presidential Election

However, what our emerging knowledge of organisational behavior suggests is that organisations with a stable, high-performing team over the long haul free up the CEO to focus on more strategic issues while the senior lieutenants focus on the tactical issues and put out the fires. If nothing else, the fact that IBTC is one of two investment banks of the pre-1990 era (and that includes all the merchant banks that ever existed in Nigeria between 1960 and 1990) and indeed the pre-2004 era, that is still alive today speaks volumes.

Indeed, evidence from the control banks, that is from other banks in our universe of banks, suggests that the banks that tended to have a lower tolerance for women in their senior management on the average have had a higher mortality rate or significantly higher rate of non-performing loans. While it may be invidious to mention the names of any financial institutions for reasons of prudence, a simple analysis of some of the larger banks in the pre-2004 era and their trajectory till date would provide the supporting evidence.

Lesson 2: It has been empirically proven that women tend to have more balanced views in times of crisis. Having a diverse management team may contribute to managing the risk-appetite of your institution and in some instances may contribute to the survival or longevity of your organisation.

On the whole, perhaps the greatest lesson from the Peterside photograph is about Atedo Peterside himself. In the reminiscences posted by Yewande Sadiku, a one-time Executive Director of StanbicIBTC and the current Executive Secretary of the Nigeria Investment Promotion Commission, “At IBTC I found people whose private affairs and comments were consistent with their public statements. The Bank aspired not to be the most profitable bank, but an inspiration to the Nigerian youth”.Indeed, this public disclosure by Yewande who herself spent about two decades at the bank explains why a one-time CEO of Stanbic IBTC was once highlighted as the highest-paid CEO in Nigeria.

Only a naïve person would, of course, believe that in absolute terms, as that disclosure only tells us about the level of transparency in the bank Atedo built. The corollary of this finding is what age-old truths and received wisdom tell us about women. Most women primarily seek security and emotional safety, even in the workplace, and if you provide those for your female colleagues, all other things would be added unto you. It is informative that both the current CEO of Stanbic IBTC Holdings and Stanbic IBTC Bank have approximately spent almost three decades each.

That is almost all of their working life!!! The ability to be able to retain and keep top talent through the season, business cycles and vicissitudes of business is a leadership skill that Atedo Peterside in his humility may be too self-conscious to admit.

Separately, even though Stanbic IBTC is not measured among the eleven banks surveyed in the IFC Women on Boards in Nigeria, it is not surprising to us that based on our research at The Diversity Initiative, Stanbic IBTC together with Access Bank (that ranked consistently highest in the IFC Report terms of women representation on boards) are among the most gender-friendly financial institutions in Nigeria.

Atedo Peterside may have only shared a black-and-white monochrome photograph, but the lessons would remain with us in colour for several years. It is called the beauty of a single photograph.

As we celebrate sixty years of women in corporate Nigeria, it is imperative we begin to clearly understand the influence women bring to organisations that stand the test of time, and how best to tap the power of loyal women on senior management and on boards.

Dr Alayande, international strategy and growth consultant and convener of The Diversity Initiative, was coordinator/senior special assistant to President Muhammadu Buhari on Economic Recovery from 2017-2019. He is author and producer of the forthcoming documentary, ‘Sixty Years of Nigerian Women’.

The Keke and Okada Ban in Lagos: Matters Arising By Tony Ademiluyi

I Will Never Run Away From Nigeria – Obasanjo

I Wish I Had Rob My Victim Before My Arrest –...