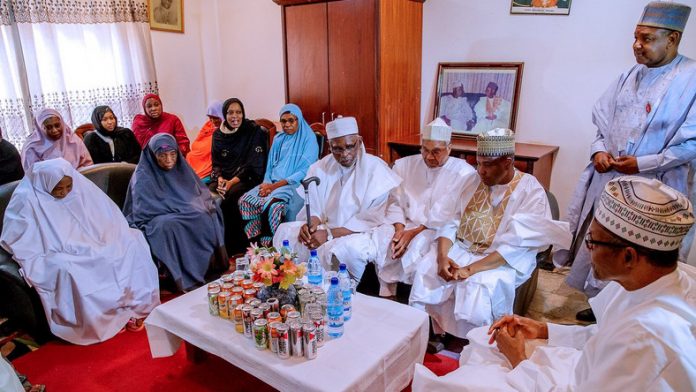 President Muhammadu Buhari has promised to immortalize former President Shehu Shagari, who passed away on Friday at the age of 93.

The President made the promise in Sokoto on Sunday while paying a condolence visit to the Shagari family.

In a letter to the Sokoto State governor, Alhaji Aminu Waziri Tambuwal, read by the governor at the event, the President stated: “I received the very sad news of the passing away of Alhaji Shehu Usman Aliyu Shagari, former President of the Federal Republic of Nigeria.

“This, indeed, is a grievous loss, which will be felt throughout Nigeria, irrespective of any difference. The late Alhaji Shagari was a landmark figure being virtually our last link to the post-independence government of Alhaji Abubakar Tafawa Balewa, and the first elected Executive President of Nigeria.

“Please convey to his immediate family, the government and the people of Sokoto State my heartfelt condolences on the passing away of this great statesman.

“The Federal Government will in due course institute a suitable memorial to the late former President”.

Buhari had earlier arrived Sokoto on Sunday to condole with the family, people and government over the death of the former President.

The President was received at the airport by Governor Tambuwal, his deputy Manir Dan-Iya, Gov. Atiku Bagudu of Kebbi, and Sen. Aliyu Wammako.

Also on ground to receive the president were traditional and religious leaders as well as his admirers and supporters.

READ ALSO:  Why We Have Been Supporting Buhari to Continue Borrowing - Lawmaker

Bishop Blessing Samuel And His Coat Of Many Colors

US Government Reveals When Nigeria Visa Restriction Will be Reviewed

Face Masks: Protect Yourself From COVID-19 Or Face Another Lockdown –...