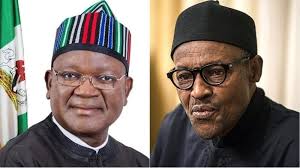 Reacting to the recent threat by bandit to kidnap the President of the Federal Republic of Nigeria, His Excellency Muhammadu Buhari, Benue State Governor, Samuel Ortom said those surrounding the president were criminals and there is absence of government in the country.

Ortom, who was reacting to a video trending on social media where bandits were flogging Kaduna-bound train attack victims and their threat to kidnap the president and the Kaduna State Governor, Nasir El-Rufai, said Nigerians were now exposed to the Afghanistan treatment.

The governor, who briefed journalists at the new banquet hall of the government house, Makurdi, further decried the insecurity situation in the country, saying that the Buhari regime had left Nigerians digging their graves.

He said, “Things are getting worse in Nigeria. You know I said this before I travelled out that, very soon, with the manner bandits are operating without proactive steps from the federal government, they will soon enter the Aso Rock.

“You have seen happenings in the country; the Kuje prison break and the threat to kidnap the president, God forbid, but this is what I saw long time ago.

“Those people in Afghanistan, who are bandits and Fulanis, are the ones (wreaking havoc). They are being sponsored. I feel pains that this is happening in my generation. There is no government in Nigeria today. Those who are surrounding the president are criminals.

“Mr president, if you are listening to me, I want to say that you are not doing well, you have violated the oath of office you took, Nigerians are in pains, they are suffering, the socio economic lives of the people have gone down the abyss.

“You have left us digging out graves, we need a true change, not the change from top to bottom you promised us in 2015.

The governor who explained the reasons he visited United Kingdom and United States of America during his two weeks vacation said it was to correct all the wrong narratives of federal government that the herders attacks on Benue State transcends climate change but occupation.

He further said that he called for the release of Nnamidi Kanu because he had committed no offense.

“I decided to visit the United Kingdom and United States of America to correct the wrong narratives that the crisis in Benue State was caused by climate change and they were supprised to learn that the attacks were beyond what they had fed them with.

“Even during the raining season, the fulani herders come to our communities killed, maimed, raped our women even our men. These fulanis come from Niger, Senegal, Mauritania and other places.

“They only used that as shield their main reason for attacks was occupation of our lands.

We Killed Our Brother-In-Law Because He Prevented Us From Holding Church...

You Have Failed Nigerians on Security – Anglican Bishop Tells Buhari

Jeff Bezos To Become World’s First Trillionaire Despite The Sting Of...

Coronavirus: List of Countries Moving to end their Lock-down Restrictions

Buhari Orders Military To Deal With Anyone Threatening The Peace Of...