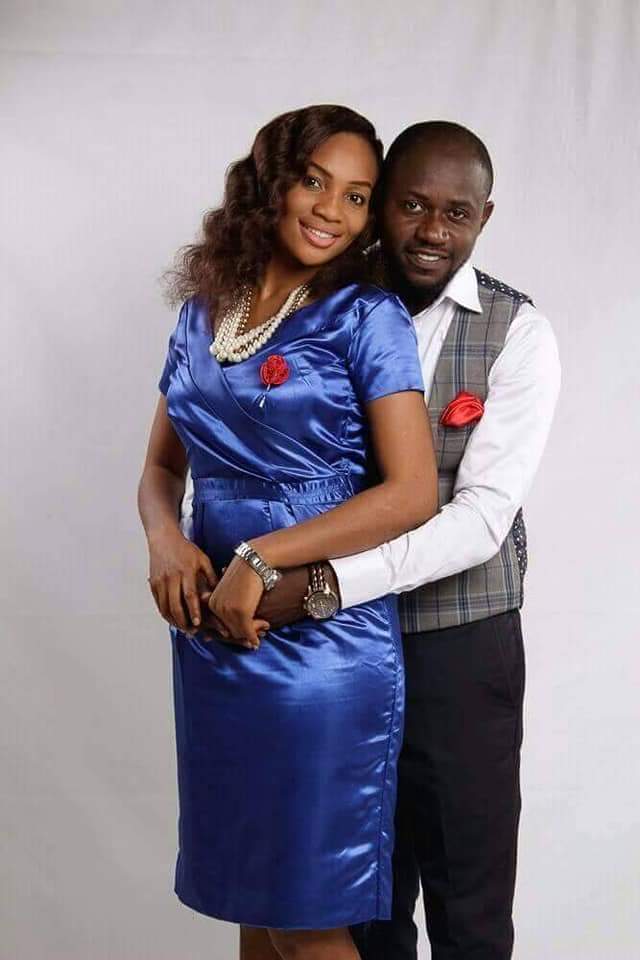 Precisely June 18, a story went viral about a man Mgbeodinma Samuel, who allegedly beat his wife, Gloria, to death just four months after their wedding.

Her friend, Meg Barn shared the shocking news with photos on Facebook that she died due to domestic violence and it went viral.

However, according to the family as narrated by Josephine Effah-Chukwuma, Founder & Executive Director at PROJECT ALERT ON VIOLENCE AGAINST WOMEN on her Facebook wall, Gloria had a happy marriage, her husband Samuel was very loving, attentive, caring, kind, good-natured and importantly God fearing. However, because of “convulsing and fainting” due to pregnancy, she died as her husband was not there to catch her the third time it happened.

GLORIA ONYEDIKACHI ODINMA (Nee Ngoforo) from Arondizuogu Imo State married her husband Samuel Mgbeodinma Febuary 10th 2018..it was a beautiful celebration, with great turn out from family,friends and well wishers…

However, contrary to the trending news on her death, Gloria had a happy marriage, her husband Samuel was very loving, attentive, caring, kind, good-natured and importantly God fearing.

Gloria Onyedikachi, blessed by God, got pregnant few months after her wedding to her Treasure as she would address her husband..Her pregnancy unlike and also like other pregnancies came with its unique symptoms…Gloria suffered severe symptoms..she would spit and vomit constantly, severe loss of appetite that resulted in terrible bone wrecking weaknesses, occasional stomach pains, dizziness and worst of all, a fainting spell that makes her slump and leaves her unconscious until resuscitated..

Before her demise Gloria Onyedikachi had slumped twice and on this two occasions, her husband was there to catch her while she fainted…First in the bathroom while he was bathing her and secondly close to the bathroom when she had gotten up to vomit, On this two occasions, Samuel had caught her before she could hit the floor, then had rushed Gloria who was unconscious at the time to the nearest hospital, with help from their neighbors..at the hospital she was resuscitated and kept on bed rest until she was fully recovered and then discharged..

Unfortunately, Gloria Onyedikachi slumped the third time on Saturday 16th June 2018 and sadly her Treasure wasn’t there to catch her, timing was terrible, she had slumped with no help close by, the bruises on her face was as a result of the probable fall, Samuel had stepped out briefly to shave and get dinner, on getting home he found Gloria who was previously on bed rest (before he left for a few minute) lying unconscious on the floor, faced up with bruises on her face..he rushed to get water, poured it over her, thankfully she jerked, half conscious but terrible weak, mumbling a few words, he rushed in picked up keys, placed her in the car, back seat, so she can be comfortable, a neighbor helped out with the gate, then he drove off in a haste to the closest hospital..

He got to the hospital, thinking he had made time, called on her, shook her, no response, frightened he screamed Emergency!! Emergency!! the Doctors and Nurses rushed out, they checked her pulse and heartbeat, nothing, seeing hope in his eyes they carefully informed him and confirmed she was dead..and refused to admit her into the hospital…

Confused and unable to accept the news Samuel at about 11;15pm 16th June and 12am 17th June called on Family, His and Hers, Close pastors and myself..Everyone around arrived at the scene, prayers were being made, while plans were made to move her to another hospital (not too far from His parents house) where Gloria was once admitted…but moving her will require a sort of report, the hospital refused to issue one, the next best report was a Police report, so while a few of the family and friends present went with Samuel to get the report, Gloria was driven to His parents house until the report comes, this was needed so that He could avoid harassment from the authorities under the circumstances.

However, the police report took longer to get than estimated, the report was ready at 5am 17th June, escorted by the Police to his parent house, Gloria already far gone was investigated and final report was signed..Gloria’s family was alerted and updated immediately..They said they were coming shortly and would want to see her corpse before she can be moved..so the Police left with the report and said we should call as soon has both family has decided on what next to do..so that they can come and escort her corpse to any further destination..

Gloria family came around noon on the 17th June, lots of unfamiliar faces but two of which Samuel had met (her uncle and aunt), they came ready for battle, there was so much chaos, violence was hanging in the air, anger and supposed vengeance, accusations of Domestic Violence was on all their lips, men and women..during the chaos pictures were taken, though the police was able to curb this activity when they arrived…already some pictures had been taken

Calmer at about 5.30pm, Gloria’s family were allowed to undress her corpse in search of evidence of beatings,violence and struggles and they found none..with this they decided and agreed that her corpse be taken to the
morgue..escorted by the police , her husband and few family..Gloria’s corpse was taken to the morgue…awaiting other arrangement..

This is the #truestoryGloriaOnye­dikachiandSamuel…N­o record of Domestic Violence.

Buratai Is A Man Of Integrity, Attempt To Destroy Him Will Not Work – Olowu

Having Three Children From Three Women Is A Blessing – Ubi...

We Will Resist MC Olu-Omo As King Of Oshodi – Olushi...

Buhari Has Offered You A New Nigeria, Don’t Give It Up...