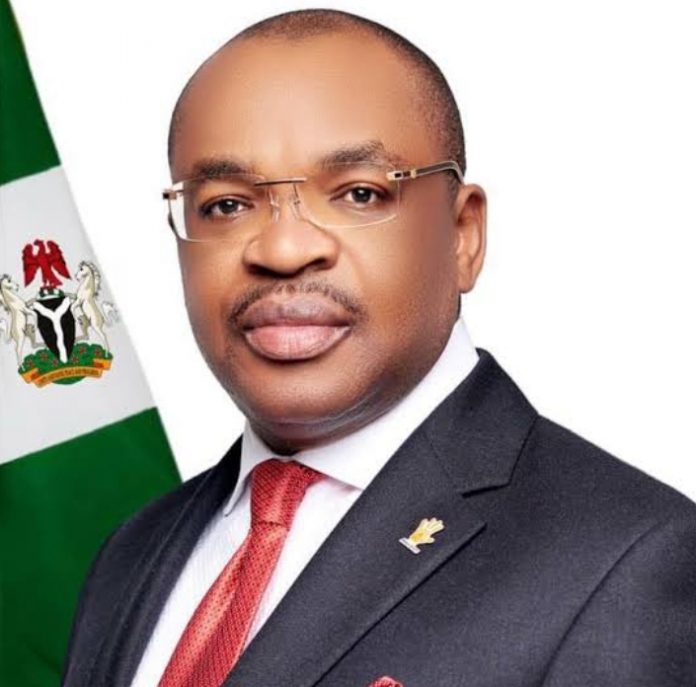 The Governor of Akwa Ibom State and one of the aspirants for the president of Nigeria Under the platform of the Peoples Democratic Party, PDP, Udom Emmanuel, has promised to solve the problems of Nigeria if he’s elected the president come 2023.

Udom who was speaking to Enugu delegates of the PDP on Wednesday, said he’s the solution to Nigeria’s problems and pleaded with them to give him their support as he remains the only one that understands the problem of the South East region and he will solve them.

The Governor urged the delegates to judge him by what he has done in Akwa Ibom and imagine what he would do as the president of Nigeria and promised to return the country to the era of Industrialization.

“I couldn’t have been here to campaign because somebody who understands the problem of the entire region doesn’t need to campaign, all he needs to do is to remind his brothers that I have stepped in not because of any selfish reasons, rather, for the interest of all of us. I have stepped into this race to rescue and restore the lost glory of this nation”

“I’m not here to tell you I can, I urge you to use what I have done in the past seven years to judge me, and if I can replicate that at the centre, Nigeria will be a better country

While decrying the dearth of industries in the country, he said that the once viable industries are all gone and promised to revamp them if elected citing the example of the coconut refinery in Akwa Ibom state which has been adjudged as the best in Africa.

“I want to reassure that hopes aren’t lost, we can rescue what we have lost, we can restore that glory, we can restore that entrepreneurship. All we need is somebody who understands, someone whose hands-on experience can tell you that if he has done this in the private sector and came into the public sector, with two recessions and COVID-19, we still have something to put on ground to tell our people that we have the sincerity of purpose, the capacity and the exposure, training and integrity to put things down. I believe, if given the opportunity at the largest scale; the national level, we will make a lot of difference and this region will regain its lost glory.”

On his plans to reform the country, Udom said: “Whatsoever we have now as a people is all that we need, we have never been dependent on other people, we use what we have, to get what we need and I can assure you that what we need now is excellent policies, safe and secured environment and the good old days will come back again.

“In the area of infrastructure, check today, the state with one of the best interconnectivity and ring roads across the whole local government areas is Akwa Ibom State. We could do that not because we go to where money is shared, but because we go to where we can create money; which is our brians and we will deploy this to solve our problems.

“I want to prove the naysayers wrong and show that we have excellent leadership and with your support, we will make all these happen.

“Enugu State, here am I, send me, join other Nigerians, make Udom Emmanuel be the man to rescue, restore and bring back the prosperity and lost glory of this nation, I’m here to serve,” he appealed to the delegates

Responding, the Enugu State PDP Chairman, Augustine Nnamani told the aspirant that he has the required capacity to be the President of the country and assured him that he’s loved and cherished in the state.

He also commended him for the introduction of Ibom Air which he (Nnamani) said is an uncommon feat and assured him that being a good friend of the Governor (Ifeanyi Ugwuanyi) who’s their leader, he’s on a good footing.

We know your capacity. Whatever it takes for anyone to be the president of this country, you have all of them. Age is on your side, intellectually, you are sound and when you talk about infrastructural development, you state is better off than when you took over.

“Everyone you’re seeing here defied one challenge or another to be here because someone like you is coming. We know that you have been able to tackle the security challenges in your state, thus, you are the man needed at a time like this in Nigeria.”

I’ll Remove Rohr As Super Eagles Coach If I Have The...

Zamfara, Rivers APC Will Not Participate In 2019 Elections – INEC...

Lockdown Has No Ending Date- Presidency