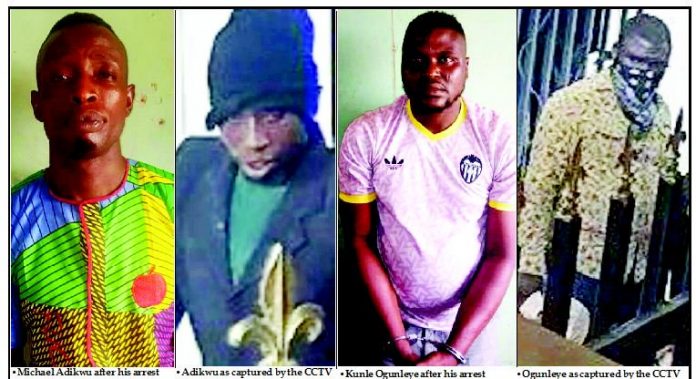 Leader of the Offa robbery gang, Michael Adikwu, a dismissed policeman, who was arrested after being declared wanted in connection with the April 5 bank robbery in Offa, Kwara State, where over 30 persons lost their lives, has revealed that he masterminded the robbery and killing of policemen over his wrong dismissal from the force.

Michael Adikwu Adikwu, who is currently being detained at the force headquarters, Abuja, has revealed that he organised the robbery operation and equally attacked the Offa police station because he wanted to teach the Nigeria Police Force a lesson.

Vanguard gathered that operatives of the Inspector General of Police Special Intelligence Response Team, IRT, who apprehended Adikwu after he was declared wanted, discovered that Adikwu single handedly killed six policemen when he and members of his gang attacked the Offa Police Station during the robbery operation.

It was gathered that IRT operatives, led by Deputy Commissioner of Police, Abba Kyari, further uncovered that Adikwu was formerly working with the Kwara State Police Command, SARS unit, before he was dismissed for allowing some suspected robbers to escape from police custody. Sources disclosed that Adikwu became embittered and vowed to deal with policemen.

Another member of the gang, Kunle Ogunleye aka Arrow, who was arrested by the IRT, also confessed that he killed two persons during the operation. While Abel, another member of the gang arrested by IRT, also confessed to the killing of five persons during the operation. He said: “I killed five people, but I sprayed bullets on many people. I don’t know if they died. “I can only confirm the death of five people, who I witnessed myself.”

READ ALSO:  Those Saying Buhari Is Being Controlled By Cabal Are Insulting The Office Of The President

Weeks After Relocating To Lagos From Delta, Lady Killed, Butchered While Making Plans To Travel Overseas

9th Assembly Leadership: Our Members Free To Their Colleagues In other Parties – APC

My Landlady Killed Her husband, Woman Friend And Then Gave Me...