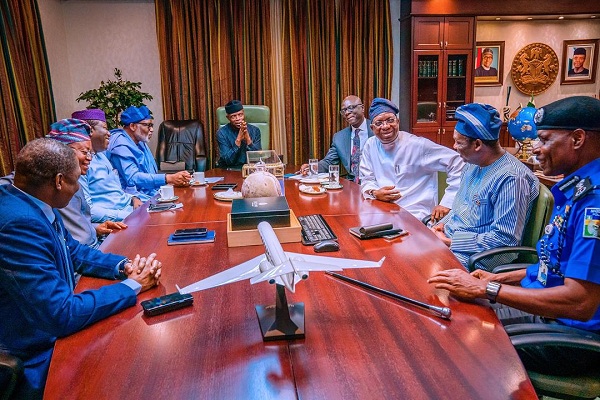 The Federal Government and the governors of the South-West states on Thursday reached a middle ground on the controversial security outfit, Operation Amotekun, as both settled for a legal “framework.”

This implies that the states will put in place all the necessary legal backing for the outfit to continue. The resolution was reached at a meeting between Vice President Yemi Osinbajo and the governors at the Presidential Villa, Abuja.

The Attorney General of the Federation and Minister of Justice, Mr Abubakar Malami, and the Inspector-General of Police, Mr Mohammed Adamu, also attended the meeting.Malami declined to grant an interview to State House correspondents after the meeting. He merely said, “We are on the same page” and smiled.

However, the Chairman of the South-West Governors’ Forum, Mr Rotimi Akeredolu, told the reporters that deliberations behind closed doors were “fruitful.”

He said after all the issues relating to Amotekun were discussed, the meeting agreed that the legal framework should be worked out for the outfit.

Akeredolu added that the governors would return home and work out the framework accordingly.

He said, “We held a very fruit discussion, the governors of the South-West were there. The AGF and the IGP also attended. The meeting was presided over by the VP.

“We have rubbed minds and all of us agreed on the way forward. The most important thing is that we are going to have the legal framework to back Amotekun. And this legal framework is one in which all of us will be part of.

He alluded to the fact of Malami saying that he was “misquoted” on his earlier stance by declaring Amotekun as “illegal.

Don Jazzy Cannot Respond To Jailing Me Because Of Pride -Kelly...