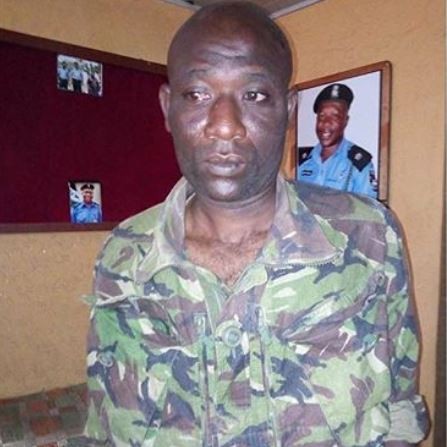 Abdul-Azeez Haruna, a 32-year-old man, has been arrested by men of Ogun State police command for impersonating as a military officer at Ifesowapo Community of Ijako in Sango Otta.

The suspect who had been terrorizing residents of Ijako with military camouflage, was seen in a show of force, at about 2:00 pm, removing a television set from the house of a resident.

His action aroused the suspicion of members of the community who accosted him, held him hostage and thereafter, sent a distress call to the police at Sango-Otta Division.

Upon the arrival of policemen, Haruna still insisted that he was an Army personnel, but had to debunk that claim, on sighting soldier guarding the Otta Unit of the Ibadan Electricity Distribution Company (IBEDC).

Nigerian Don Found Dead In US

Cultist Stabs Colleague To Death During Argument Over Wristwatch