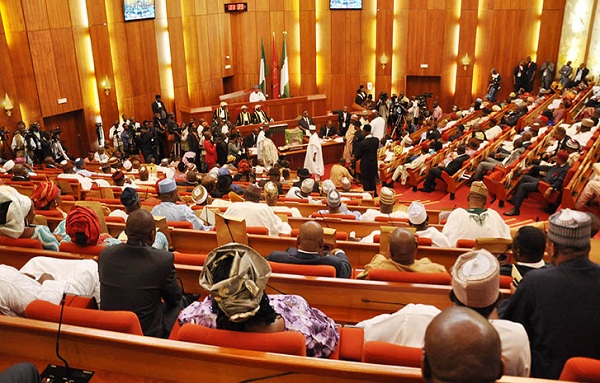 The call by the Minority Leader of the Senate, Enyinnaya Abaribe, on the President, Major General Muhammadu Buhari (retd.) to resign immediately based on Buhari’s inability to curtail the alarming security challenges in the country caused a stir on the floor of the red chamber on Wednesday.

Abaribe spoke after the Senate Leader, Yahaya Abdullahi, presented his motion on rising security challenges in the country. Abaribe said the attitude of the president to insecurity in the country, surprised him. He said those who live by propaganda will die by propaganda.

Abaribe said he was building up to the fact that they said Boko Haram has been defeated. He said the hard work that was supposed to be done to secure the country was not done because of the propaganda. He said excuses for non-performance is now staring them in the face.

He said Niger and Jos killings by Boko Haram terrorists indicated that the insurgency war was far from over. He said the opposition members in the National Assembly are of the opinion that Buhari should resign from office.

When the uproar generated by Abaribe subsided, Senator Abdullahi Adamu said Abaribe’s submissions were unnecessary. The President of the Senate, Ahmad Lawan, also appealed to his colleagues to approach the issue with caution.

READ ALSO:  We Are Taking Note Of Everything Going On In Kogi And Bayelsa Governorship Elections - U.S

Meanwhile, the senators also protested when the Deputy President of the Senate, Ovie Omo-Agege, in his contribution vehemently opposed the creation of state police on account of paucity of funds crippling the states and possible abuse by the state governors.

Oshiomhole Accused Of Receiving Bribe As DSS Grills Him Over APC...

Buhari Will Gladly Meet You In Court – Presidency Replies PDP

Aso Rock Cabal Declares War On Osinbajo For Disrespecting Them During...