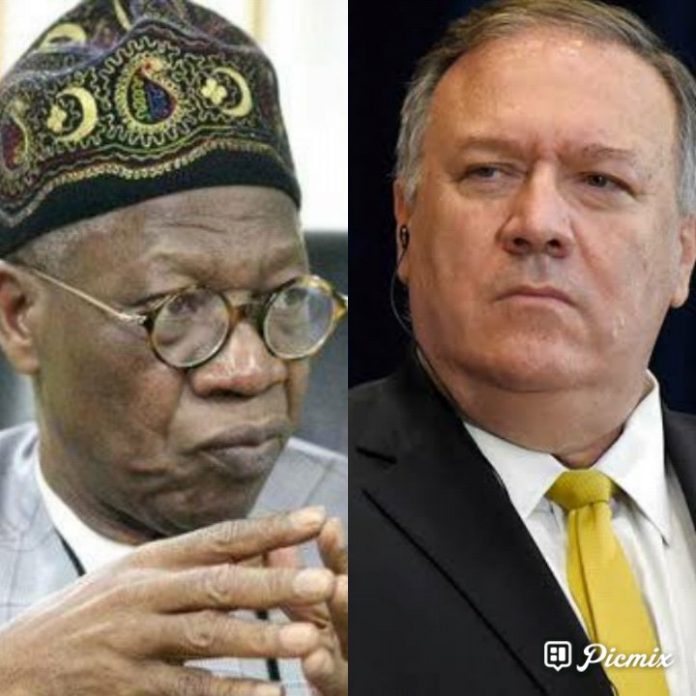 The Federal Government has faulted the United States for adding Nigeria to a religious freedom blacklist, which contains countries with severe religious violations.

The Secretary of State Mike Pompeo had on Monday designated Nigeria as a “Country of Particular Concern” for religious freedom.“These annual designations show that when religious freedom is attacked, we will act,” Pompeo wrote on Twitter.

However, the Minister of Information and Culture, Alhaji Lai Mohammed, in a statement, faulted the allegations. He explained that the allegation, by the United States, of engaging in systematic and egregious religious freedom violations was faulty.

The denial was contained in a statement issued in Abuja on Tuesday by Segun Adeyemi, Special Assistant To The President (Media) Office of the Minister of Information and Culture. Mohammed described the allegation as “a case of an honest disagreement between the two nations on the causes of violence in Nigeria”.

“Nigeria does not engage in religious freedom violation, neither does it have a policy of religious persecution. Victims of insecurity and terrorism in the country are adherents of Christianity, Islam and other religions,” the Minister added.

He also explained that “Nigeria jealously protects religious freedom as enshrined in the country’s constitution and takes seriously any infringements in this regard.”Apart from Nigeria, other nations on the blacklist include Saudi Arabia and Pakistan, as well as China and Iran. Eritrea, Myanmar, North Korea, Tajikistan and Turkmenistan are also on the list.

INEC Puts On Hold Issuance Of Certificates Of Return To Zamfara...

I Am Now A Better Politician – Ambode