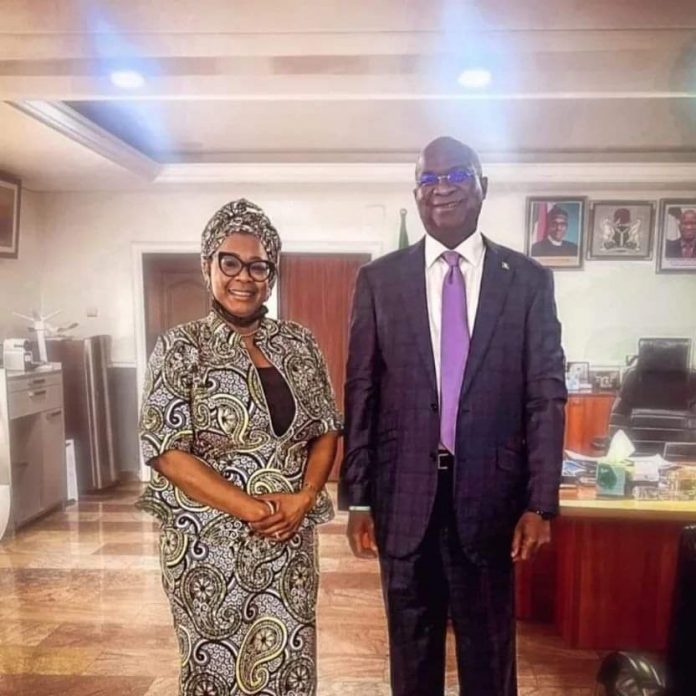 The Lawmaker Representing Oluyole Federal Constituency, Rep. Tolulope Akande-Sadipe has met with Minister of Works and Housing, Babatunde Fashola, over the deplorable condition of Olomi/Olojuoro and Liberty Academy Roads in Oyo State.

The lawmaker called for the immediate rehabilitation of the roads, describing them as death traps.

She said this in Ibadan after a meeting with the Minister at his office during the week.

The lawmaker revealed she had fruitful deliberations with the Minister, arguing that priority attention ought to be given to such roads which shared borders with Ogun state, in order to save it from the present deplorable state.

Akande-Sadipe, who Chairs the House Committee on Diaspora expressed her worries on the slow pace of work on the federal roads within Oluyole Federal Constituency.

“Olomi road has now become a death trap, where lives are lost on a daily basis, adding that business activities and wellbeing of residents are negatively affected”, she said.

She said despite several interventions made by her in the past, the Federal roads through her constituency have not seen any significant improvement.

The lawmaker argued further that the roads, when rehabilitated, will not only boost the economic fortune of the residents of the areas, but would lead to drastic reduction in serial auto crashes that have claimed people’s lives.

Akande-Sadipe further said that she has visited the sites three times with the major stakeholders of the federal government including the Public Complaint commission and representatives of the Ministry of Works.

“After back-to-back intervention and calling out of contractors, we haven’t seen any improvement as inaction continues to add to the sufferings of my people”, she added.

“This road, I mean Olomi Olojoro road has been listed in the budget every year as far back as 2018, but up until this moment, we cannot continue to bear the suffering, we need an urgent intervention. We also have five other roads under the purview of the ministry that has been listed in the 2022 budget, but we haven’t felt the impact of this inclusion in our communities”

According to her, “economic activities are being halted on Olomi road and several constituents are on the verge of relocation from their personal homes due to the condition of the road, this road should be a blessing as it borders Ogun State and has the potential to boost economic activities of both states.”

While acknowledging the complaints of the Lawmaker, the Minister of Works, Babatunde Fashola promised to expedite the process and immediately requested for an investigation and prompt action on the road.

He reiterated that the Federal Government has not reneged on its resolve to reduce the commuter’s plight through massive road rehabilitation in the state.

Social Media Regulation Bill: If China Can Do It, We Can...