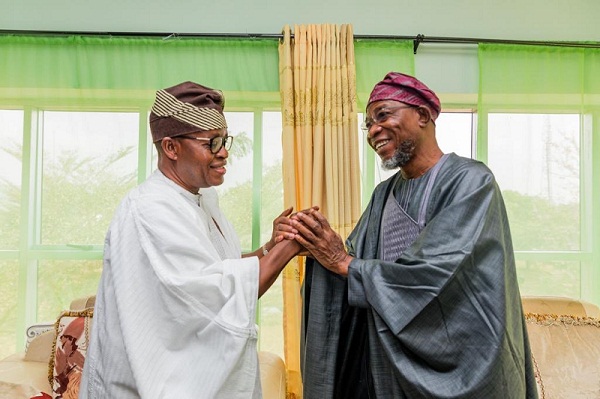 Chairman of ‘The Osun Progressives,” a faction in the All Progressives Congress in Osun State, on Sunday, said no reconciliation yet between the Minister of Interior, Rauf Aregbesola; and the State Governor, Adegboyega Oyetola.

The Osun Progressives, backed by Aregbesola during the last governorship primary of APC in the state, had supported a former Secretary to the State Government, Moshood Adeoti, against Oyetola, who eventually won the party’s ticket.

Initially, both men had denied being at loggerheads, but days before the primary election exposed deep seated ill-feelings between them.

However, pictures of Oyetola and Aregbesola in a warm embrace had on Sunday surfaced on the social media with accompanying caption suggesting that the two men had reconciled.

But when contacted for reaction, the chairman of The Osun Progressives, Mr. Lowo Adebiyi, accused members of Ileri Oluwa, the campaign group of Oyetola, of circulating the pictures.

“They are old pictures. Members of Ileri Oluwa group are behind it. Disregard them. If there will be reconciliation, it is not pictures that you will see first. Discussion will be held first. No discussion yet. Nothing happened. No reconciliation yet,” Adebiyi said.

Corroborating Adebiyi, Mr. Rasaq Salinsile, the chairman of the APC faction in Osun supported by Aregbesola, in a chat, also told our correspondent that the pictures were taken about three years ago, when the minister came to the state for an official assignment of his ministry and decided to pay a courtesy call on Oyetola.

He said, “To the best of my knowledge, there is nothing like reconciliation. The pictures were taken about three years ago when Ogbeni came for an event organised by his Ministry in Ilesa and he paid a courtesy call on Oyetola.

“I was at the scene where the pictures were taken. It may happen tomorrow, but as of today, nothing like reconciliation.”

Also, an aide to Oyetola, who preferred anonymity, said the pictures were not recent.

She, however, did not rule out moves by the parties involved in the disagreement to initiate reconciliation.

Bishop Dr Gospel Brings December Without Disaster To The People Of...

Why I Recommended Nine Police Officers For Dismissal – IG

Edusko Transitions Into an Education Marketplace, Rewards Parents For Enrolling Their...