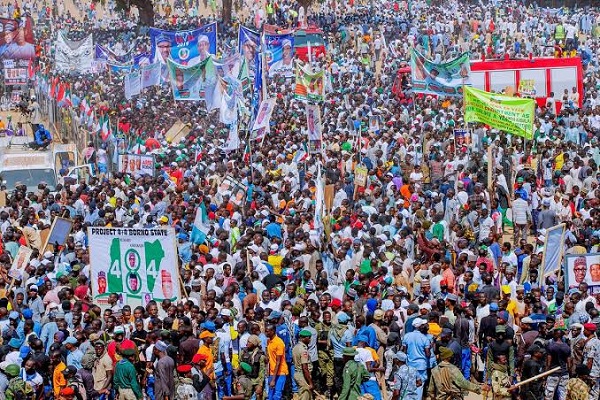 The All Progressives Congress (APC) says former Vice-President Atiku Abubakar and Peoples Democratic Party (PDP), his party, represent the “wasted past” that Nigerians have chosen to correct.

The ruling party said this in reaction to Atiku’s charge to the PDP on rebuilding itself rather than focusing on the 2023 elections.

In a statement on Sunday, Lanre Issa-Onilu, APC spokesman, said the rebuilding of the opposition party must begin with the return of the resources allegedly stolen by it. Issa-Onilu said Atiku was “anything but sincere in his advice.”

“Instead of Atiku focusing on how to corner the 2023 presidential ticket of the PDP or any of the other political parties where he may choose to purchase his ticket, we call on Atiku, along with other PDP leaders to find the courage to return our resources and seek forgiveness from Nigerians,” he said.

“Return of our stolen resources and sincere apologies for the havoc wrecked on the country during the Peoples Democratic Party (PDP) 16-year rule should be the preoccupation of PDP. “Atiku and the PDP represent the wasted past which Nigerians have chosen to discard and correct.

“The era when national assets were a bazaar for cronies and friends; an era when funds were approved and released for projects that were never executed; an era of waste and impunity; an era of voodoo economy; an era when corruption was a state policy.” The APC spokesman said the country is now witnessing an era of infrastructural development.

“The resolute and pro-people intervention by the President Muhammadu Buhari government has ensured the plugging of revenue leakages, oil sector reforms, anti-corruption policies, economic diversification, rapid infrastructure development, intensification of fight against violent extremism among others,” he said.

“Particularly in the fight against public sector corruption, the recently-launched Open Treasury Portal (OTP) complements previous initiatives such as the administration’s full implementation of the Treasury Single Account (TSA) which has increased the level of accountability and transparency in the financial resources of the government; stoppage of budget padding, contrary to what we witnessed throughout the 16 years of the PDP and pruning out thousands of ghost workers through stricter implementation of Integrated Personnel Payroll System (IPPIS).”

Issa-Onilu asked Atiku to use the post-election period to defend himself “on the several corruption and criminal indictments.”

Why I Rap In Yoruba Language – Mz Kiss

OsunDecides: I Did Not Deliberately Boycott The Debate – Adeleke

I Will Never Ask INEC To Change Result Of Supplementary Poll...