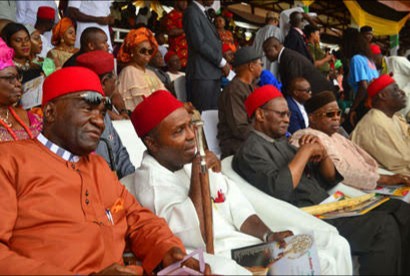 Ohanaeze Ndigbo and some church leaders have fixed December 27 for street rallies to campaign for Igbo presidency in 2023. They also said they had concluded arrangements to write the President, Major General Muhammadu Buhari (retd), the leadership of the All Progressives Congress and the Peoples Democratic Party to notify them of the need to zone the 2023 presidency to the region.

They said the rallies would hold in Abia, Anambra, Ebonyi, Enugu and Imo states simultaneously. The Ohanaeze Ndigbo Chairman in the Diaspora, Dr Nwachukwu Anakwenze, disclosed these to journalists in Awka, the Anambra State capital. He said, *Those we are considering for the presidential seat from Igbo are present and past governors, senators and House of Representatives members from the zone who are performers.

“We envision a Nigeria where leadership is based on the ability to work hard, where fairness reigns with a sense of direction and accountability to the various groups and for the common good of the country.“It’s now the turn of the South-East to provide good leadership for the good of all Nigerians so as to move Nigeria in a positive direction.”

Anakwenze noted that the Igbo would need the support of other regions to produce the next president. “We believe in alignment. We cannot get the presidency by ourselves, even if all the Igbo vote. We are already working with people from other zones and we are in talks with them already,” he said.

In a related manner, the President General of Ohanaeze Ndigbo, Chief Nnia Nwodo, will lead a delegation of the pro-Biafra group, Movement for the Sovereign State of Biafra, and other youth groups to meet with Buhari regarding the Igbo presidency in 2023.

MASSOB leader, Mr Uchenna Madu, disclosed this on Friday at the Government House, Enugu, after a joint meeting with the governors of the region, leaders of thought, ministers and National Assembly members as well as traditional and religious leaders from the region.

Madu, who read a 10-point demand of the Igbo youths, had earlier demanded that the Ndigbo should be allowed to produce a president in 2023.“We demand that the South-East be given the opportunity to produce the president of Nigeria in 2023,” he said.

Close-Up On The Gym Instructor Who Murdered 49 People In A...

Ex-President Goodluck Jonathan Was Under Pressure To Prosecute, Send Buhari To...

N24tn Debt: Nigerians Have Nothing To Worry About – FG