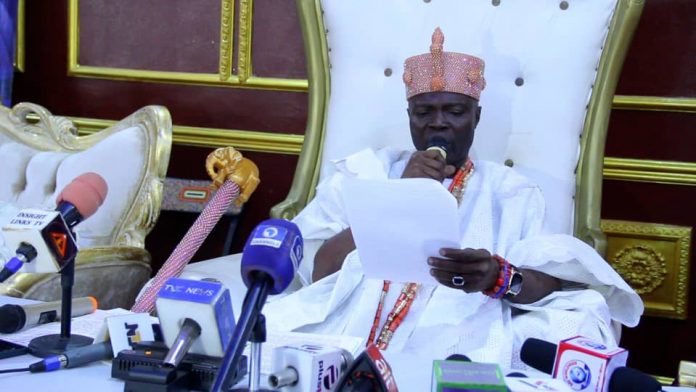 Olowu of Kuta, HRM Oba Adekunle Makama, Tegbosun 111, has described the attempt by some faceless groups to tarnish the image of the former chief of army staff and Nigeria Ambassador to Benin Republic, Ambassador TY Buratai as effort in futility.

Speaking at a press conference in Kuta on Tuesday over the recent publication against the former COAS, Olowu said Buratai is of unimpeachable character worthy of emulation.

Olowu flanked by other traditional rulers in Osun State said he’s ready to support any Nigerian that’s patriotic and have shown enough commitment to the unity of Nigeria like Buratai.

With the Theme, “ We Can Vouch For The Integrity of Buratai”, Olowu said it was the timely rebuttal of the ICPC that thwarted the shenanigans of those who want to ridicule Buratai simply because of politics.

He said, “ It was the timely intervention of the ICPC that the money was found with the military contractor and not Buratai’s residence that saved the day, otherwise some would have believed the hatchet job by the online portal.

“For instance, if you found money meant for contract from one of Julius Berger’s directors, does it mean the money belong to President Muhammadu Buhari who gave them contract?

“Buratai has no house in Wuse 2 where all the items recovered by the ICPC were found. It’s purely an attempt by politicians to tarnish his image. Not many people were comfortable with his presence at the Eagle Square recently during the All Progressives Congress Primary in Abuja. “He has also been named as part of the APC campaign council for Osun State governorship election in July. I think you can see where the attack is coming from.”

READ ALSO:  Australian Celebrity Had Her Feet Cut Off After Contacting Malaria Through Mosquito Bite in Nigeria (PHOTOS)

Olowu who said Buratai has transformed the Nigeria mission in Cotonou said pulling him down purely because of politics is condescending.

I Don’t Mind Loosing Some Of The Students, I Was Ready...

Aisha Buhari Did The Right Thing Speaking Out Against Her Husband...

2Face Finally Speaks On Cheating Allegation, Says Everything Will Be Fine