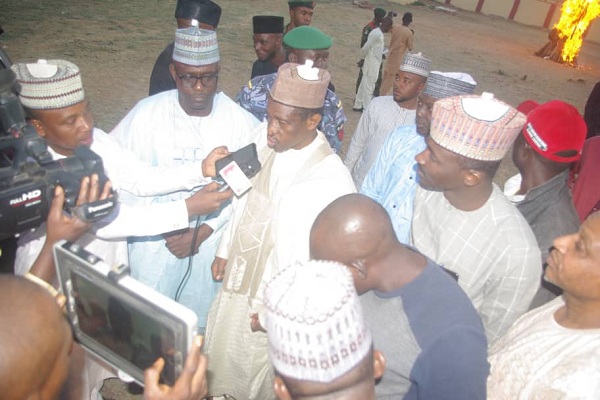 The Commander 1 Brigade Nigerian Army Gusau, Brigadier General Olatokunbo Musiliu Bello has called for peaceful coexistence and integration amongst Nigerians during the festive season, while also assuring on the combat readiness of the Brigade in securing Zamfara state and its people, in line with the vision of the Chief of Army Staff, Lieutenant General TY Buratai, which is “to have a professionally responsive Nigerian Army in the discharge of its constitutional roles”

The Commander of the Nigerian Army’s premier Brigade made this assertion during the 1 Brigade Nigerian Army combined West African Social Activities (WASA) for 2019 which took place yesterday 27 December 2019. The Commander 1 Brigade also thanked the Chief of Army Staff for his continued support of all the brigade activities and making the welfare of the troops top on his priority.

The colorful event which took place at the Brigade Headquarter’s Parade Ground, had a host of side attractions including performances and displays by various cultural dance groups, local magicians, snake charmers, the local ‘Yan Tauri’ knife-fighters, amongst others. This year’s WASA was made more interesting due to its all inclusive nature as as total of 10 traditional ethnic dance groups from across the nation were invited to perform at the event.

The 2019 combined WASA also included presentation of awards to 1 Brigade personnel who distinguished themselves in their various places of deployments during the year. Among the award receipients were the 1 Brigade Acting Garrison Commander, Major GE Etubus, the Acting Commanding Officer 1 Military Intelligence Regiment Major AA Bello and the Commanding Officer (Rear) 1 Battalion Major AJ Abdulkarim, amongst others.

As it is, the West African Social Activities (WASA) is an annual social event organized in the formations of the Nigerian Army to mark the end of a successful training year.

This dates back to the days of the West African Frontier Force when the British Colonial Commanders incorporated a social forum into African Military life for soldiers to display local customs and ways of life. It was and still is used to showcase the rich cultural, traditional or customary heritage of members of the Nigerian Army.

WASA affords officers, soldiers, their families and friends, the opportunity to interact freely. It also serves as a forum where various ethnic groups showcase their cultures. WASA gives formations and units the opportunity to mix with each other in a social setting while also being a veritable avenue to promote civil military relations, a practice which the Nigerian Army holds in very high esteem. Above all it is also an avenue for the Nigerian Army to give thanks to God for the end of a successful training year.

Highlights of the event was the Beating of the Retreat and the lighting of the Bonfire by the Special Guest of Honour.

2020 Is A Perfect Figure, Prepare For It Wisely – Adesope

Federal Government to Spend N10.6bn Transporting COVID-19 to 36 States in...