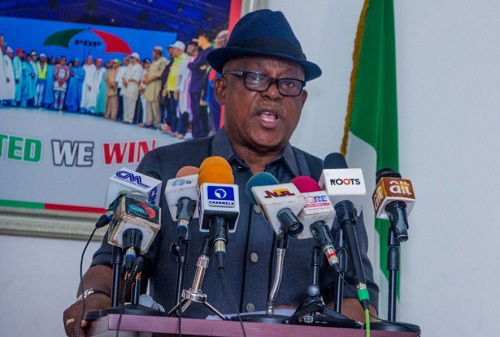 The Peoples Democratic Party (PDP) says the “fresh revelation” in the European Union (EU) report has vindicated the PDP and millions of Nigerians, in its position that the February 23 presidential election was rigged to favour President Muhammadu Buhari and the All Progressives Congress (APC).

In a statement by Kola Ologbondiyan, spokesman of the party, PDP said the EU report has shown the world that the opposition party has not been “crying wolf in insisting that the election was outrightly rigged”.

In its report, the EU made some recommendations which it said could help Nigeria strengthen its electoral process. The presidency had reacted promising to support the Independent National Electoral Commission (INEC) to implement the recommendations.

But the PDP said Mahmood Yakubu, chairman of the commission, ought to be prosecuted over the manner in which elections were conducted.

“Nigerians are still in shock over the revelations by EU of how about 2.8 million votes were deliberately cancelled without sufficient accountability and how several returning officers gave no reason for the cancellations,” the statement read.

“More shocking is the iniquity committed at the national collation center, headed by the INEC Chairman, where the EU report exposed inconsistent numbers, distortions and a large discrepancy of 1.66 million more registered voters, as announced by INEC on 14 January, compared to those announced by state returning officers during the collation of presidential results.

“Nigerians witnessed, on national TV, how professors and returning officers were unable to reconcile result figures due to heavy manipulations upon which INEC declared the APC winner.

“The EU report has further exposed the iniquity committed by the Prof. Mahmood Yakubu-led INEC by listing how ballot boxes were compromised, how essential materials were missing, how “voter register was not always ticked as required” and how “manual authentication procedures were not correctly followed.

“The PDP therefore commends the EU for the courage in exposing the evils committed by the APC and INEC in the 2019 general elections.

“The PDP insists that those in INEC, who perpetrated such crime against our nation, in sabotaging the sanctity of our electoral processes to frustrate the choice of Nigerians in a presidential election, must be brought to book and made to face the wrath of the law.”

Why I Placed A Curse On My Fan – Actor Kenneth Okonkwo

Buhari Is Not Sincere To Labour Workers In Nigeria – Fela Durotoye

Adeboye Set To Roll Out Another Intensive Care Unit Facility For Commissioning In Ogun...

APC Is A Promise And Fail Party – Wike