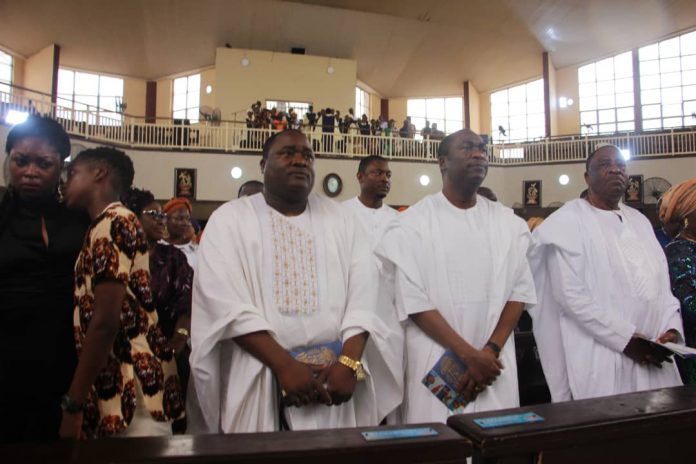 Eminent personalities within and outside Nigeria on Sunday, the 14th of August 2023 graced the 78th birthday celebration of former Distinguished Senator of the federal republic of Nigeria, Senator Anthony Adefuye at his Lagos residence.

Senator Anthony Adefuye is a top political ally of the presidential flag bearer of the All Progressive Congress, APC, Asiwaju Bola Ahmed Tinubu and also a member of the Lagos State Governance Advisory Council, GAC.

Those in attendance cut across political, social, religious and ethnic divides.

The one week long celebration event kicked off on Wednesday, 10th August, 2022 as the celebrant hosted all his political associates including over 30 Asiwaju Bola Ahmed Tinubu Campaign Support Groups at his residence. DG Bola Tinubu/Shettima campaign organization and Former Minister For Communications, Engr Adebayo Shittu was among dignitaries on this day.

The celebration continued on Thursday, 11th August with the finals of the annual Senator Anthony Adefuye Under 16 football competition for male and female footballers at the NPA sports ground, Surulere, Lagos with some ex internationals in attendance.

On Friday, the Theater Art and Motion Picture Practitioners Association Of Nigeria, TAMPAN held it’s annual OLUGBON DAY celebration in honor of the celebrant as part of the events put together for the birthday celebration of the political titan.

The celebrations continued on Saturday as the day was specially set aside for only family of the Adefuyes as Senator Adefuye hosted all his family members both Nuclear and extended, cutting across 4 generations to a family get-together at his residence.

Sunday, the 14th August was the final and the D-Day of Senator Anthony Adefuye birthday celebration and it lived more than expectations as every who is who in the society was either in attendance or sent In a representative.

The Deputy Governor of Lagos State Dr Obafemi Hamzat and other top government functionaries were on hand to accompany the Adefuyes to the birthday Mass Celebration at St Dennis Catholic church Bariga Lagos, from there the celebration proceeded to the Lekki residence of the celebrant where some other political, social and business associates of Senator Adefuye all trooped in to celebrate with one of their own.

Senator Anthony Adefuye was a political disciple of late Yoruba leader, Chief Obafemi Awolowo and one of the strongest political allies of the presidential candidate of the All Progressive Congress, APC, Asiwaju Bola Ahmed Tinubu .

It’s Honorable To Be A Dancer Than A Treasury Looter –...

Lauretta Onochie Not Worthy To Be INEC Commissioner – Jega