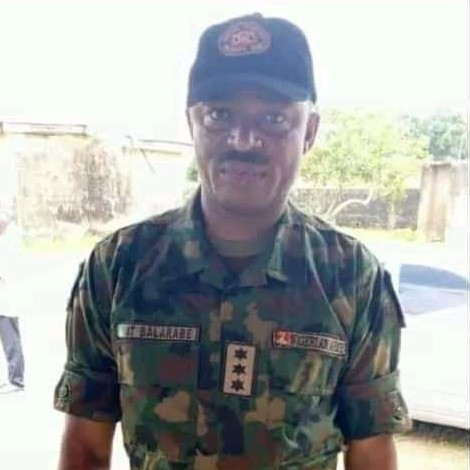 Army captain, Balarabe Tijani, has been identified as the military officer who set the notorious kidnapper free.

The Commanding Officer of 93 Battalion Ibi, Taraba State, Captain Tijani, reportedly employed the services of a welder in the community to destroy the hand and leg cuffs on arrested kidnap kingpin, Hamisu Bala Wadume, before setting him free.

More revelations have emerged regarding how the police officers from the Inspector General of Police Intelligence Response Team were killed by soldiers in Taraba State on August 6.

This is just as we gathered authoritatively of how the Commanding Officer of 93 Battalion Ibi, Captain Balarabe Tijani, employed the services of a welder in the community to destroy the hand and leg cuffs on Hamisu Bala Wadume, before setting him free.

The Captain, who is said to have been interrogated by the panel from the Defence Headquarters, was said to have resorted to using a welder to remove the leg and hand cuffs from his friend after the Divisional Police Officer in charge of Ibi Command, Aondona Augustine Iorbee, whom he contacted for the keys, told him he didn’t have them.

Top police sources told our correspondent in Abuja that aside seeking for the keys from the DPO, Captain Tijani also contacted the station’s Crime Officer, Inspector Aliyu Dadje, who also said he did not have the keys.

According to our sources who did not want to be mentioned, the hand and leg cuffs were actually destroyed in the house of the Captain where he took the kidnap kingpin to after rescuing him from the IRT operatives.

It was gathered that after shooting and killing some of the detectives, they were all moved to the military base in the town alongside the kidnapped kingpin before he was eventually moved to the house of the Commanding Officer.

Why I Refused To Obey Court Orders On El-Zakzakky’s Release –...

Investigators Deployed To Helicopter Crash Site, As Osinbajo Speaks On His...

Election Postponement: You Are A Lair – Buhari’s Minister Slams INEC...