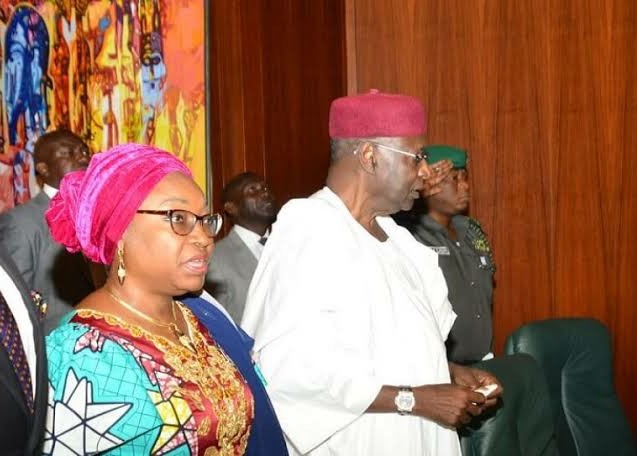 Winifred Oyo-Ita, the head of service of the federation, is currently at the Presidential Villa in Aso Rock.

Oyo-Ita, who is currently being investigated for an alleged N3 billion contract scam, had stayed away from the retreat organised for ministers-designate despite attendance by other top government officials.

She was spotted entering the office of the chief of staff, Abba Kyari.

On Monday, it was reported that she sent a letter to President Muhammadu Buhari offering to proceed on retirement.

Although she has vehemently denied involvement in any scam, she bowed to family pressures and handed in her letter.

The Economic and Financial Crimes Commission (EFCC) recently questioned Oyo-Ita over allegations that she used front companies to get contracts when she was a permanent secretary before her appointment as head of service by Buhari in 2015.

The EFCC said the petition against her was written in 2014 when President Goodluck Jonathan was still in office.

APC PDP Trades Words As More Than 30 People Dies In...

We Did Not Abandon Lord Of Ajasa – ID Cabasa, Olamide...

I Don’t Need Protest To Recover My Stolen Mandate – Atiku

I Will Recover My Mandate From Buhari – Atiku Vows

NNPC Reveals Why Many Nigerian Refineries Is Not Working