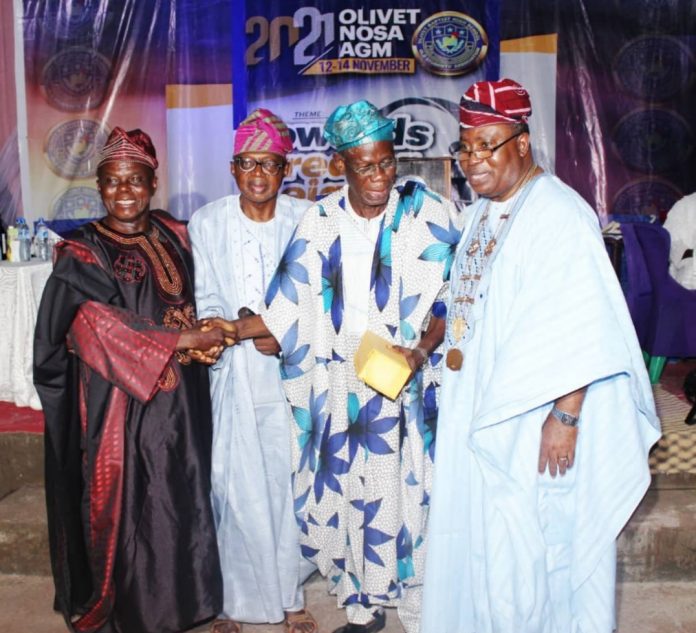 The Old Students Association of Olivet Baptist High School held its annual general meeting where a new set of executives were elected to pilot the affairs of the association for the next two years.

The three-day event which started from November 12th –14th, 2021 had old students of the school from far and near in attendance. Themed ‘Towards Greater Heights’, it was definitely a memorable moment that will remain in the heart of the attendees for a long while.

Pre-annual general meeting session and projects commissioning took place on the first day of the event, November 12th. In the same vein, a novelty football match was played between the 1995 set and the present junior team of the school. In addition, the Annual General Meeting held in a pleasant atmosphere with cheerfulness had different year sets and chapters ably represented. Also, the election for new executives took place on Saturday, November 13th with Dr. Wale Okediran becoming the new president of the association.

Dr. Wale Okediran, an impactful Olivetian, a notable medical practitioner, a former member of the House of Representatives and the General Secretary of the Pan African Writers Association, couldn’t contain his joy when he was declared unopposed as the new president of the association.

He expressed gratitude to the immediate past president, Mr. Gbolahan Labinjo and his team while stating his mission as the new president of the association.

“As the new president of this association, it’s a big duty for me. I want to thank old students and former presidents for counting me worthy of this position. I will definitely continue from where they stopped.

Our focus in this new administration will be how to improve the school, help the students and encourage the teachers who have worked for these students to be groomed. Also, we will be working on welfare for our old students who need help.

One of the issue that came up during the meeting is that there is no boarding system in the school, our plan is to establish a private boarding house for student.’’ He said.

Also, the immediate past president, Mr. Gbolahan Edward Labinjo expressed confidence in the newly elected president, making it known that he is excited that Dr. Wale Okediran is his successor.

Going down the memory lane, he mentioned some of the achievements his administration was able to record

“Dr Wale Okediran is loved by Olivetians, I’m excited that he is my successor. As an Olivetian, you go with the flow, most of the vision he has is to continue to see how we can help the school academically, support with additional infrastructure and meet with the specific needs of the school.

“On my achievements, I would love to say they are not mine but all Olivetians that supported the team. I’m proud the hall we are sitting in today is one of the things we saw at the beginning of my tenure and we made it happen. The second one is the sports field that was accomplished and commissioned. There are several projects I can’t name and that’s why I’m proud of those things.

Unemployed Engineer Returns Missing Wallet With Pounds To The Owner In...

President Buhari’s emphasis on the Importance of family values in society.

FG: Why Salaries Of ASUU Members Dropped After IPPIS Implementation