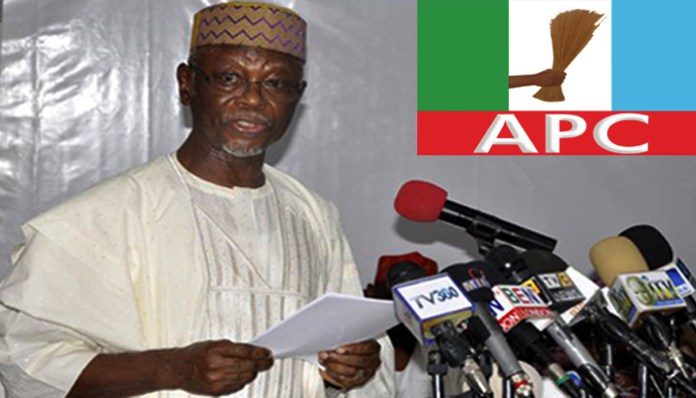 National Chairman of the All Progressives Congress (APC), John Odigie-Oyegun, has revealed why he withdrew from re-contesting the party’s national chairmanship position in the forthcoming National Convention slated for June 23.

He said his decision was “in the party’s interest.”He stated this on Friday night in Abuja while speaking with newsmen, adding that he arrived at the decision after wide consultation with close political associates and family members and not because of intimidation.

He said that the tenure extension that the party’s National Executive Committee had agreed to suffered a setback following President Muhammadu Buhari’s opposition.

According to him, the tenure extension would have helped to stabilise the party in the face of some of its challenges and might have prevented the crisis that followed its recent congresses in some states of the federation.

He said that some of the party leaders ought to have considered the tenure extension to be in the best interest of the party. This, he said, would have ensured that the party enters the 2019 elections as a united fighting force, rather than one that is potentially weakened by internal conflicts arising from competitive congresses and convention.

Odigie-Oyegun called on party leaders to close ranks and to make the party a strong fighting force ahead of the 2019 general elections.“Now that the Convention Committee has invited interested aspirants to obtain forms to contest various national positions in our party, it has become necessary for me to state my position.

“I have consulted widely with my family, friends and associates, even though I had the desire to re-contest as the national chairman of the party.“I have decided that it is ultimately in the best interest of the party for me to withdraw from the race.

“I believe that the party faces difficult days ahead, and all critical stakeholders in its leadership would be required to bind together for a common purpose,” he said. He advised that a less-contentious convention would be better for the party, adding that he had always sought to be a part of solving the party’s problems.

“I do not intend to be part of the problems for APC to solve. It is for this reason that I hereby declare that I will not be seeking re-election as the national chairman.“However, I will continue to perform my functions as the national chairman of the party till my tenure officially ends on Monday, June 25, when a new set of party executive will be inaugurated,” Odigie-Oyegun said.

Why I Kill My Girlfriend, Buries Her After Defrauding Her – Lover

We Arrested Orji’s Son, We Have No Business With Atiku’s Son – EFCC

Nigeria Is No Longer Safe For Me, Some Strange People After My Life –...

Why I Dumped My Political Ambition – John Fashanu