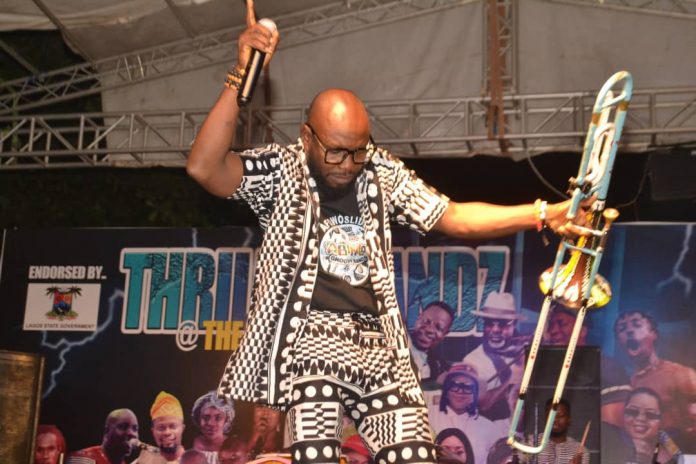 This music album which comes out on major platforms on May 2, 2022, is a contemporary African Music Album blended with an eclectic instrumentations, voicing and arrangements with soothing Trombone solos.

The contemporary album, ARA which is an acronym for Afrocentric Rhythm Album is a contemporary album with seven sons. According to Abbey Afowoslide who has been in the industry for up to two decade, “the songs in my album include ‘Ojúmó Ire’ which Is a devotional song to usher you in to a blissful new day, free from evil and hazards; ‘Tomorrow No One Knows’ is such a didactic kind of music that teaches morals for all and sundry. The song preaches about perseverance, resilience, hard work, time consciousness and self reliance; ‘Wura Mi’a tribute song to all the good Mothers in the entire globe.

The role of a good mother like my biological mother can never be taken for granted. May all mother’s eat the fruit of their labor; ‘Ile Wa Dun’ – My Number One which is a love song to assure the beautiful woman that chores at home are the man’s responsibility if she agrees to marry him. Love is a beautiful thing especially how we express it in Africa, it’s natural. I love you my wife; ‘ E Ranti Ile’- Something is certain in life that there’s no place like home. Wherever we go in life, let’s remember where we are from in the cause of searching for Greener Pastures, ‘ Yi O Si Da’ – Better Times.

The belief that one day everything is going to be alright gave birth to this track. And if situations remains the same then boomerang on them all. I’m using this track to preach to everyone; government, individuals, organizations to be a good Leader and Teammates and ‘Ọmọ o, Éìípẹ́ Dàgbà’: Afowoslide’s a scintilating rhythm, a robust and soothing horns line, backed up by the sound of various percussions, while the Iya Ilu mothers the delivery. Its a pure beauty to behold.

“Ọmọ o, éìípẹ́ dàgbà” which has been released as a solo song is a song laden with sacred lyrics and words of encouragement that gives hope to the barren, whilst praying for long life to celebrate growth and ravel in the gift of the present,” he explained.

Afolaranmi Olaoluwa Abiodun aka Afowoslide (Abbey Trombone) is a Nigerian seasoned musicologist, a songwriter, a prominent musician in the scene of the Modern day Nigerian Music Industry. His Concept and conceptualization of Music gave birth to Afrocentric form of music. He blends his unique and beautiful tone on Trombone as an instrument of Expression, also with his Abinibi Groovy Band to portray African Music to the globe.

At a very early age of 11 he displayed a prodigious talent and skills in playing the Guitar and the Drums. Subsequently, he took a passionate interest to play the Trombone as his favourite instrument. This bears eloquent testimony and influence in his music as he dazzled the audience with his unique and pretty tone using the trombone with his Abinibi Groovy Band.

Undoubtedly, his kind of Music is educative and didactic in nature leading to social integration and reform, bringing African Music to the fora and a point of influence to the global world.

If Buhari Loses His Job, Youths Will Be Employed – Omokri

BREAKING: Dr Ghali Umar of the Department of Architecture Dies in Kano