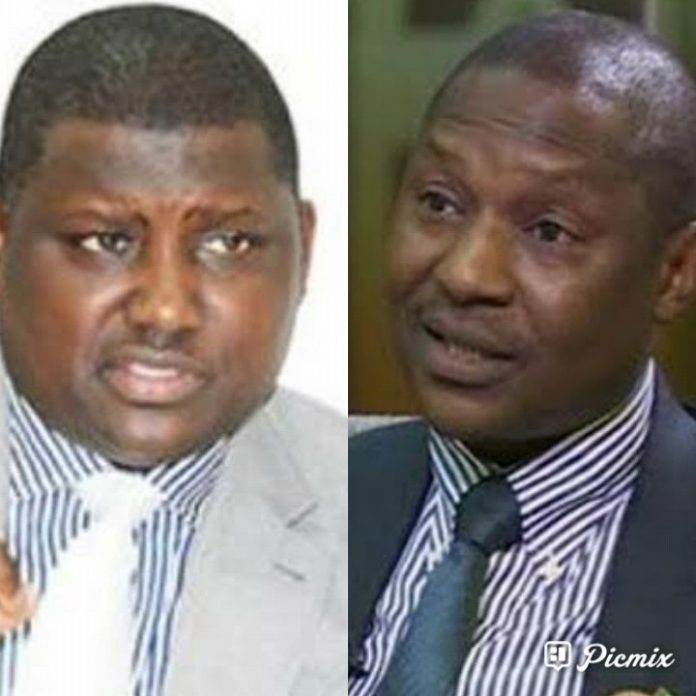 The former Chairman of the defunct Pension Reform Task Team, Abdulrasheed Maina, who is being prosecuted on money laundering charges involving alleged diversion of pension funds, on Wednesday wrote to the Attorney-General of the Federation and Minister of Justice, Mr Abubakar Malami (SAN), asking for a review of the case him.

Maina alleged in the letter that the case instituted against him by the Economic and Financial Crimes Commission was a product of persecution by the commission’s suspended acting Chairman, Mr Ibrahim Magu. The letter dated August 31, 2020, but received by the AGF office on Wednesday, was signed on Maina’s behalf by his lawyer, Edwin Inegedu, of Pitcher and Courts.

Magu was suspended in July after the Justice Ayo Salami-led panel of inquiry was set up to probe allegations leveled against the acting EFCC chairman by the Malami. The panel had also heard testimonies of some defendants being prosecuted by the EFCC. The EFCC has already called six prosecution witnesses Maina’s trial which is pending before Justice Okon Abang of the Federal High Court in Abuja.

Maina’s request for request for a review of the case was not specific, but his letter urged the AGF to review all the case files involving him “to prevent the travestyabuse of public office and malicious prosecution being carried out by the EFCC”. Maina stated in the letter that as the Chairman of PRTT, he and his team members, including the representatives of the EFCC, and the Department of State Service, recovered the sum of N1.63trn and a total of 237 landed assets.

He also alleged that the EFCC under Magu’s watch started persecuting him after he demanded accountability of the recovered assets kept in the commission’s custody. The letter stated, in part, “This was principally due to our client‘s demand that the EFCC should account for the sums and properties recovered by the PRTT, and kept in the EFCC’s custody.

SECURITY: 30,000 Policemen Deploy To Lagos Ahead Of Saturday Election