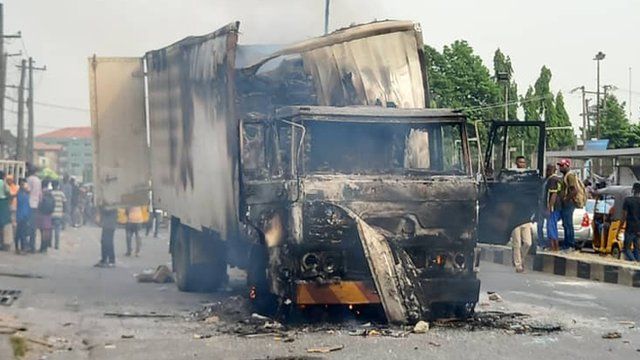 The chaos which occurred on Tuesday on Ogunnusi Road, Grammar School Bus stop, Lagos State, has led to the death of Two students, Eight survival.

While being chased by officials of the Federal Road Safety Corps, he lost control of the vehicle and ran over the pupils by the road side going home after School hours.

The driver, who took to his heels after the incident, was reportedly caught at Aguda — about two kilometres from the scene of the incident — by some students and youths who accosted him and later handed him over to the police.

The truck, which was loaded with soap, was set ablaze.

A student of Ojodu Grammar School,  where the victims were coming from, claimed that 17 students died, while several others were injured.

He said, “I was also at the bus stop trying to buy doughnut while the other students were trying to cross the road. Some boys had crossed earlier, so they were at the other side of the road abusing the female students for not being smart enough to cross like them.

“The students gave the truck driver a sign to wait for them to cross, but it didn’t stop and the truck crushed 17 of them to death, while some were injured.

“The driver did not wait, so other students and adults chased the driver to Ogba, where he was arrested and his truck was burnt.”

A commercial motorcyclist, who witnessed the incident, said he saw 15 dead bodies.

He said, “I have never witnessed such a terrible thing in my life. I saw 15 pupils lying lifeless on the floor. The incident occurred around 2 pm.”

A riot broke out when policemen deployed in the scene fired tear gas canisters to disperse the crowd.

Angry youths subsequently broke the windscreens of about 10 trucks plying the road and beat up one of the drivers.

Bonfires were also made on Aina Street, close to the Ojodu Police Station. As several parents, amid tears, paced around the scene of the incident, looking for their children.

“I have not seen my two children. One is in JSS1, while the other is in JSS2. They are Nafisat and Abdulqowiyu Amusan. We live in Lambe (Ogun State),” one of the distraught mothers lamented.

She later called one of our correspondents back on the telephone that the children were found at the Lagos State Accident and Emergency Centre, Ojota.

Pupils were seen in groups discussing the incident, as some mentioned the names of the victims.

“I saw Sodiq lying down covered in blood. Two pupils, who were siblings, were also crushed,” a pupil, Olamide Joseph, said.

Some of the students were rushed to the Royan Hospital, St. Timothy Catholic Hospital, and the Lagos State Accident and Emergency Centre, Ojota, among other medical facilities. Some of the injured students are receiving treatment.

The FRSC, in a statement by the Public Education Officer of the Lagos State Command, Olabisi Sonusi, on Tuesday, denied involvement in the accident, adding that seven pupils were rescued by its officials, while another seven were rescued by first responders.

The statement read in part, “An articulated truck was said to have lost control at the Grammar School Bus Stop along Ogunnusi Road, Lagos, which caused the death of unverified number of students and leaving many injured.

READ ALSO:  Fuel Hike: Don't Worry, You Will Soon Get Use To N170 Per Litre - Timipre Sylva Tells Nigerians

“The men of the FRSC were called upon by passersby to help intervene after the crash happened.

“The general public should disregard the disgruntled information being circulated by some unscrupulous elements that FRSC men caused the crash. We want to place on record that our men were not in any way involved in the cause of the crash as patrol activities was not ongoing along that axis as of the time of the crash.”

The Director-General of the Lagos State Emergency Management Agency, Dr Femi Oke-Osanyintolu, said he could not also ascertain the number of casualties.

He said, “This unfortunate incident provoked some bystanders into taking the law into their hands by attempting to lynch policemen, LASTMA officials and other first responders at the scene, destroying vehicles and other properties.

“The attack by the miscreants led the emergency team to head back to base as the scene was insecure and unsafe for rescue and recovery operations.”

The state Police Public Relations Officer, Adekunle Ajisebutu, in a statement on Tuesday, said two people died in the accident while 12 people were injured.

Ajisebutu noted that the driver, Bolaji Kabiru, had also been arrested.

He said, “Traffic personnel from the Motor Traffic Department of the Ojodu Police Division immediately visited the scene. Corpses of the dead students (identity not yet known) were removed with the support of officers of the FRSC and were deposited at the morgue of the Mainland Hospital, Yaba, for autopsy. The erring driver has been apprehended and kept in police custody.

“However, the angry students, who were later joined by hoodlums, set the accidented vehicle ablaze. They also attacked the Ojodu Police Station in their large number, demanding the release of the driver for jungle justice.

“However, when their demand was not met, they became violent. In the process, they destroyed four vehicles parked on the premises of the police station and another mobile truck on the highway.

“To avoid total breakdown of law and order, the Lagos State Commissioner of Police, Hakeem Odumosu, immediately ordered deployment of policemen comprising tactical teams, Rapid Response Squad and others to the scene to maintain law and order.

“The protesters were professionally dispersed with minimum force without resulting to any further injury.

“While commiserating with the bereaved families who lost their loved ones in the fatal motor accident, the Commissioner of Police appeals to sympathisers and other members of the public to allow the police carry out a thorough investigation and avoid seeking self help.”

#2019 Presidential Debate: I Will Fix Agric, Roads And Infrastructure For...

The Vision God Showed Me About Nigeria – Tunde Bakare