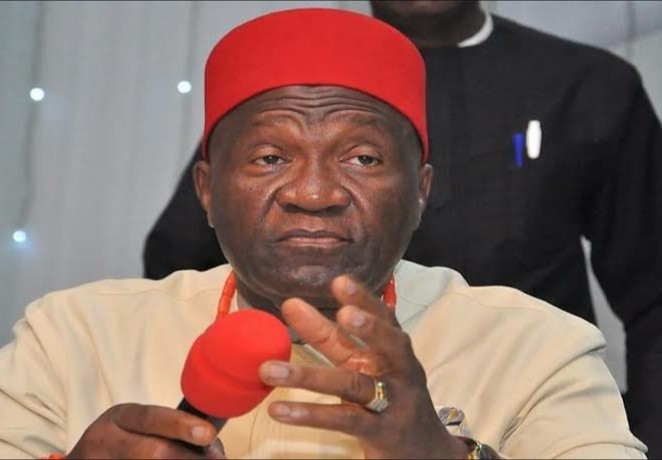 The immediate past President-General of the Ohanaeze Ndigbo socio-cultural group, Chief John Nwodo, has called on the Federal Government to initiate and conclude the process of restructuring the country before the 2023 elections to avoid a situation where some sections of the country may boycott the exercise.

He said Nigeria used to be the envy of nations, given its pedigree in education, agriculture and well-being of its people because there was a regional system of government that allowed regions to enjoy sovereignty over their national resources until the system was thwarted. He, therefore, cautioned that to avoid the “coming catastrophe”, Nigeria must restructure.

Nwodo, who was the ninth president-general of the apex Igbo group, spoke in Lagos on Friday at the 17th Chief Gani Fawehinmi annual lecture, with the theme, ‘The constitutional history of Nigeria’s dysfunction: Any pathway to indivisibility and common progress?’

The event, organised by the Ikeja Branch of the Nigerian Bar Association, was also attended by the Governor of Borno State, Prof Babagana Zulum, human rights lawyer, Femi Falana (SAN), legal practitioners and human rights activists, among others.

There have been agitations for the restructuring of the country so that states or regions could control their resources.

Several prominent individuals and sociocultural groups, especially those in the southern part of the country, have stressed the need to restructure the country, insisting that the current system was tantamount to a unitary system of government, which they said could not work for a diverse nation like Nigeria.

Nwodo, who was a keynote speaker at the event, explained that there was a time the mainstay of Nigeria’s economy was agriculture, and that all the regions had different items they were producing and exporting, which availed them funds to develop their regions.

He added,“There was only one reason why things worked so well then. We had a regional system of government that allowed regions to enjoy sovereignty over their national resources whilst paying royalties and taxes to the Federal Government. Our domestic security was independent and uncontrolled by the Federal Government.

“Suddenly, the army came to power and abrogated our constitution, turned us into a unitary state and imposed a unitary constitution on us. They seized our natural resources and donated them to the Federal Government to share without adequate respect for derivation.”

Speaking on what must be done to avert “the coming catastrophe”, he said,“Nigeria must restructure and give its component units sovereignty over its natural resources provided they pay royalty or some form of taxes to the Federal Government to maintain federal responsibilities like external defence, foreign missions, customs and immigration.

“Emphasis must return to agriculture and education. Domestic security must remain in the hands of the federating units because living safe in Nigeria today is by luck. The secularity of the Nigerian state must be respected. These irreducible minimum conditions are not negotiable. If it does not happen, we will have no alternative but to go our separate ways.

“Processes to begin our restructuring as a nation must be concluded before the 2023 elections so as to avert a situation where sections of the country may boycott the elections and present the country with a constitutional force majeure.”

‌
Nwodo, who was a two-time minister, also decried a situation whereby the President and federal lawmakers exclusively share the appointment into the Independent National Electoral Commission, saying Nigeria could learn from South Africa and the United Kingdom.

He stated, “In South Africa, the Chief Justice appoints the head of the electoral body and he does so first by advertising for those who are qualified to be in the commission to apply. After people have been nominated, he publishes the list of those nominated and those who have been objected to are delisted before the final stage.

“In the UK, the electoral commission is headed by the speaker but composed of all political parties in the ballot, making rigging impossible. That is why results are announced instantaneously after the collation of results. Nigeria must restructure. So long as INEC and state electoral commission members are appointed by the President and governors respectively, there will never be a free and fair election.”

He said despite the country’s abundant human and natural resources, it remained the poorest nation in the world and a major importer of things it produces.

Speaking on education, Nwodo said Israel, United States and some other countries were leveraging education to come up with world-class innovations while Nigeria maintained a record of having the highest number of out-of-school children, coupled with some immoral practices, like sex-for-grade, in higher institutions.

He added,“If the source of knowledge is contaminated, like a contaminated water reservoir, can you get clean water. Our higher institutions must be devoid of sharp practices and acts capable of compromising their integrity within and outside our borders. Education, road and agriculture are critical areas in the development of a country’s economic potential.”

APC PDP Trades Words As More Than 30 People Dies In...

I Have Done Too Many Crazy Things For Men – Actress,...

Zamfara, Rivers APC Will Not Participate In 2019 Elections – INEC...